R.Kyle Hannah, Sci-Fi writer of "Assassin's Gambit" - around the Cauldron

R.Kyle Hannah, ex-Army turned science fiction writer, was the second interviewee to visit the Cauldron in 2012.

Promoting his well received novel "Time Assassins", he and his many friends and fans helped establish the Cauldron in those early days when few people had heard of us. It was only in the last three months that Kyle's interview dropped out of the top ten, such was its popularity amongst readers of the Cauldron.

I was delighted to be able to interview Kyle once more. A gentleman and an optimist, I picked up the Wizphone and caught up with Kyle as he was battling his way through Level 19 of The Division somewhere south of the Mason Dixon line.

Original Chat With Kyle Hannah - Only The Second Ever. Click Here!

For those of Wizardwatchers who weren’t about two years ago, who is Kyle Hannah?
First, thanks for giving me your platform, again.  I do appreciate your support!  Who am I?  I am a soldier, writer, husband and father with a love of reading, writing and computer games.

In what genre do you write?
Science fiction…although I do have one or two fantasy stories bouncing around in my head.

Whereabouts in the US are you from?
Southern by the Grace of God! LOL    Alabama

Alabama is regarded as the only state having all the major natural resources required for making steel and iron. In fact, it is considered as the largest supplier of steel and cast iron pipe products. - See more at: http://alabama.facts.co/interestingalabamafacts/aboutalabamafunfacts.php#sthash.hdhRpZzg.dpuf

Classic Alabama girl Kate Jackson moments.
(Was she actually Charlie?
I have heard it argued - Ed!)

Charlie's Angel Kate Jackson, Nat King Cole, Carl Lewis, Joe Louis, Hank Williams and Emmylou Harris are some of the famous people to come from the state, which was accepted into the Union in 1819


Tell us about your latest work.
After the success of TIME ASSASSINS in 2010, I had many people ask for more of the alternate history timelines. 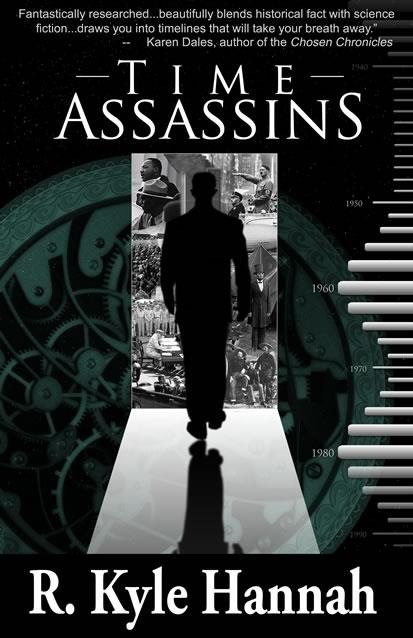 So I sat down and penned ASSASSIN’S GAMBIT.


"Pulled forward in time by the Guild of a distant future, Assassin 101 is tasked with tracking down a rogue agent before he can return to his time. What he finds is a web of espionage bent on destruction and domination, and a family secret makes the Assassin doubt his own future. Sebastian Caine, a top level Apprentice, has duped the Guild into complacency. Sentenced to death for his crimes, he escapes into the past. Plans for a new life hinge on drastically changing the timeline. Rick Brewer has been a guinea pig for Guild scientists since his capture. Along with Assassin 97, he is sent to retrieve Caine, but his growing affection towards her becomes more pronounced as they bounce through the Renaissance in search of Caine. When Assassin 97 is captured and tortured, Brewer must make the ultimate sacrifice. To rescue Assassin 97, Brewer and Assassin 101 must violate Guild law and, with it, accept possible execution. Can Assassin 101 save his wife and his future, or will the Guild leave her to history?"

You served in the Armed Forces in Afghanistan. How did your work go down amongst your colleagues? Did you get much support?
I found a great deal of support among my peers…as well as some strange looks (you write books?).   I was deployed to Kuwait last year, and that gave me plenty of time at night to work on ASSASSIN’S GAMBIT…as well as two other stories that are in the works.

Did your time in the Armed Forces inspire your work?
My first book, TO AID AND PROTECT, was greatly inspired by military tactics.

The TIME ASSASSINS series has a little military inspiration (the training scenarios), but most of it is centered around historical events.

What do you think of the state of contemporary science fiction? Is it a dead genre? Is there something else to say?
The self-publishing and Indie explosion in the last few years has opened up a great market for science fiction, so it’s definitely not dead.  There is a lot of great writing from unknown authors out there…and some that really, truly sucks.  :D

The Worst Sci-Fi Novel Ever Written? A New Statesman Review  (reading this book has become a "geek challenge" - Ed!)

What are your impressions of the Indie landscape?  How have you found marketing and promoting your work? Any tips for debut novelists?
The Indie route is a fantastic way to get your name out there while striving for the “big contract”.   Marketing and promoting are non-stop and much more difficult than actually writing…and very time consuming when you have a full time job on top of everything else.  Interviews and blogs are a big part of that marketing campaign…they open up your work to a much broader audience.


"Join us on #MondayBlogs with your blog every Monday. The fastest growing Blogshare service on Twitter".


Tips?  Write, write and write some more.  Write every idea down, no matter how small or seemingly obscure…the opportunity will arise where that idea/scene will fit in perfectly!


In writing your series, you inadvertently summon up the spirit of the Time Bandits, the quasi-Monty Python vehicle from the eighties. You are whisked away and clapped in irons in the brig of a giant flying galleon. Just in reach is a sack, which contains two books, a CD, and a DVD boxed set of a TV show from the last five years. What would you like them to be?

All from 5 years…way to narrow that down, thanks!  Books?

Old Man’s War and Ghost Brigades from John Scalzi…some of the most original and fantastic storylines I’ve read in a while.

Somewhere in California by Night Ranger.


DVD Boxed set?  Well, I’m going outside your 5 years for that one…Babylon 5 .  I’d be happy with either.


You are a big fan of the Crimson Tide. Should I be placing a massive bet on them this year?
Actually, I an Auburn Tiger (War Eagle!), but I do pull for the tide when they aren’t playing Auburn.  I don’t know if I’d bet on the Tide this year, but I would put some money on the Tigers…they are going to continue their streak from last year!!

And finally – congratulations on the sequel, btw – what are your plans for 2014 and beyond?

Thank you.   I have a tentative story for the 3rd and final instalment in the TIME ASSASSINS series; a rough draft of a TV adaptation of TIME ASSASSINS;  a new story involving rival tribes; and a 2-3 book space saga.   Lots of ideas, all written down, just waiting for right time.  The next few years will be fantastic!

Kyle, its been a trip down memory lane for me and I hope you've enjoyed it as well. I wish you the very best of luck on behalf of all the Wizardwatchers...

Thank you for the opportunity, Wiz. And you have definitely helped me because Assassin's reached the top 100 bestsellers!