This week, we are treated to the wit and humour of  Georgina Young-Ellis, a writer of...well, you'll see.  Her grand and elegant looking books have attracted rave reviews in the States, but she doesn't appear to be as well known over here, which is surprising considering the topics she writes on.  With Christmas on it's way, gift-buyers seeking an out-of-the ordinary present could do a lot worse than buy one of Georgina's sumptuously covered paperbacks. Characterised by crisp, no fuss diction and crystal clear prose, Georgina knows her way around a keyboard and her blogs too are an excellent read. Reaching for the Wizphone, I interrupted her while she was poring over the fragile scriptures, tomes and mildewed parchments which are the engine room of her historical labours. (By candlelight, I liked to imagine!) Here's what she had to say...

Tell us a bit about yourself, Georgina.  Whereabouts in the US do you live? Do you like it there? Have you lived anywhere else?
Hi Mark, thank you so much for having me on your blog! I live in New York City. Well, Queens, actually, but it’s part of NYC. I love this city with all my heart. It’s exciting and vibrant. People are tolerant, open minded, and generally intelligent. There’s always something happening, lots of opportunities, and wonderful culture and entertainment. I grew up in the southwest: California and Arizona. California has too many cars and Arizona is too hot. However, as an adult, I also lived for several years in New Mexico – a gorgeous place, but a little boring.

Ultimately, I moved back to NYC where I’d gone to college. Never been happier.

Tell us about your writing. What books have you published? Which is the most recent?
I’ve published three books, all part of a time travel series. The first is The Time Baroness, which takes place in Jane Austen’s England.

the second is The Time Heiress, a journey to pre-Civil War New York City, and the third is The Time Contessa, an adventure in Renaissance Italy.

Now I’m working on The Time Duchess, in which my heroine goes back to Elizabethan London to settle a long standing controversy: was Shakespeare really the author of the plays that bear his name?

In what genre do your books most comfortably nest?
I usually categorize them as romance, since Cassandra, the main character, often falls under the spell of the time she’s in and, as a result, some intriguing gentleman. In the first book, I’d say the focus is more on the romance, but in the following two, it’s equally on the adventure. There’s a lot of danger and action. Anyway, the more accurate genre would be “romantic, time travel fiction.”


You are also a serious blogger. I have heard lately that outside the big twenty blogs, blogging is becoming  tough. Do your blogs enhance your sales, or do they take away from good writing time?
I don’t blog that often – usually no more than once month on my main blog, Nerd-girls, Romantics, and Time-Travellers, and less so on the others. I don’t know if they enhance my sales or not, but they are good outlets for expressing things that wouldn’t fit in my books.

I love the Searching for Sincerity blog I do with my husband. We only post when we find a place, usually a business, that strikes us as either very sincere, or extremely insincere. We might go months without posting there.

Anyway, I don’t think they take away from good writing time. It’s good to work on writing that isn’t book-related sometimes.

Do you have pets?

I do have pets: three cats, Renfield, Thisby, and Violet (if any of them were to proofread, it would be Renfield - a large grey cat who disappeared for 5 weeks and then came back all skinny and rangy.


He's smart and very loving, though obviously has a mind of his own.) I also have a water snail named Gary (very long story) and my 21 year old son has a Corn Snake named Apophisis.

She, (yes, she) actually got out of her enclosure and disappeared for six months, turning up in the bathroom - yikes! You're welcome to use any of those.

A little bird tells me you suffer from insomnia? We have something In common. What do you do to try and alleviate the condition?
Well, lately, I’ve been sleeping well because I’ve had a cold and that always makes me sleep. Not a great solution for insomnia, is it? Insomnia is a fairly recent development in my life. I’m trying yoga, which I think helps, and an Indian sleep formula that includes Gotu Kola.

Melatonin helps a lot of people, and used to help me, but not so much anymore. I asked the doctor for a prescription for Ambien but have only taken it twice in as many weeks. I think it helps me sleep just knowing it’s there. It means I don’t have to panic.

What is a nerd girl? How would I spot one in the street?
Ah, good question. A nerd girl can be spotted because she’s usually wearing something unusual –either something vintage (which is what you’ll often find me in), something a bit Goth (not my style) or she looks a little like a librarian (a look I also like).

Also, she inevitably has a book in her hand, probably something classic or science fiction. She might be wearing glasses, but not necessarily. I think the key is that she doesn’t fit in: fashion-wise, or other wise, and she’s proud of the fact. She obviously doesn’t care what others think and has an intelligent spark in her eye.

As you are nattering away while cooking lunch for your family, you are carried away by a sparkly space-time vortex. In what may be a second, or a million years, you find yourself on an island and you are apparently alone, except for some goats. You discover a sack under a palm tree on your travels and in the sack, there are two books, a CD  and a DVD. What would you like them to be?
The books will be The Hummingbird’s Daughter by Luis Alberto Urrea and Daniel Deronda by George Eliot (hah! You thought I was going to say Pride and Prejudice didn’t you!) 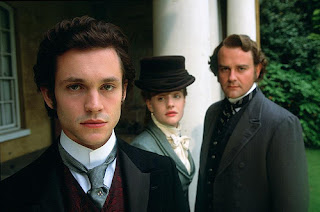 As I assume there’s something to play the DVD and CD on, the DVD will be the BBC Pride and Prejudice with Colin Firth (ah, there we go),

and the CD will be the Goldberg Variations by Bach as performed by Glenn Gould.

I actually listen to rock more than classical, but I can’t spend eternity without Bach.

What can a hungry guest expect for dinner chez Georgina?
Mexican food! Being from the Southwest, I am an excellent cook of Mexican cuisine – not fancy, gourmet stuff, but super basic, we would say “border food” (meaning from the Arizona/Mexico border). Tacos, burritos, enchiladas. All simple and spicy.

And finally, what can fans of the Time Trilogy and Georgina Young-Ellis look forward to in 2014
Along with The Time Duchess, which hopefully will be done in 2014, I will also be releasing something outside of my time travel series. It’s a sexy, paranormal thriller called “A Murder of Sirens.”

Georgina, it's been an absolute pleasure meeting you and wish you all the best with your work in the coming year.
Thank you, Wiz. I've really enjoyed being around the Cauldron. 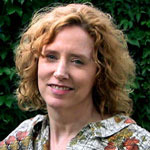 Other social networking sites may be available.


Charles Bukowski – New Mexico
I was fairly drunk when it
began and I took out my bottle and used it
along the way. I was reading a week or two after
Kandel and I did not look quite as
pretty but
I brought it off and we
ended up at the Webbs, 6, 8, 10 of
us, and I drank scotch, wine, beer, tequila
and noticed a nice one sitting next to me -
one tooth missing when she smiled,
lovely, and I put my arm around her
and began loading her with bullshit.
when I awakened at 10 a.m. the next morning
I was in a strange house
in bed with this
woman. she was asleep but looked
familiar.
I got up and here was one kid running around in a
crib and another one running around the floor in
pajamas. I picked up a letter addressed to one
“Betsy R.”, so I went back and said,
“hey, Betsy, there are kids running around all over
this place.”
“oh Hank, damn it, I’m sick. I want to sleep, not
rap.”
“but look, the …”
“make yourself some
coffee.”
I put the pot on and the little boy ran up in his
pajamas. I found a shirt and some pants and some
shoes and
dressed him.
then I cleaned a bottle with hot water, filled it
with milk and gave it to the kid in the
crib. he went for
it.
then I went in and squeezed her
hand. “I’ve got to go. are you all
right ?”
“yes, a little sick. but please don’t feel
bad.”
I called a yellow cab and we went back across
town.
is this what happened to
D. Thomas ? I thought.
if a man didn’t think too much he could be proud of his little
conquests -
except that the women were better than we – asking nothing
as we squirted our poetry
our bullshit our
sperm to
them.
we were sick poets sick
people.
across town I knocked on the door of my host and
hostess.
“what happened ?” they
asked.
“nothing. got
lost.”
they sat a beer in front of me
and I drank it as if I were
wordly:
a piece-of-ass
any-night
anywhere
type.
“somebody got a
cigarette ?” I asked.
“sure, sure.”
I lit up and asked,
“heard from Creely
lately ?”
not giving a damn whether they had