This week - from her foreboding citadel just outside Cadiz - amidst the orange groves, the raging bulls, bunches of giant pomegranates hanging from parched trees, underneath the illumination of cobalt skies and in the glare of the ever-burning sun, the wonderful Ngaire Elder is back around the Cauldron, by popular demand. 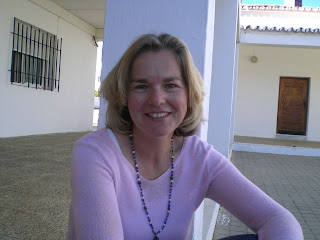 This morning on my way home from doing the school run, I saw an unusual scene, almost haunting. One of the mountains was shrouded in a smoky-grey layer of cloud with the crests of windmills sprouting through the top. You know the type of windmills I’m talking about, the ones you see on a ‘wind power farm’ not the Don Quixote type!  It triggered a childhood memory – the Pink Floyd music video to Another Brick in the Wall in particular the scene with the walking hammers. I was an ‘ankle-snapper’ (no, kidding Ed!) when the original music video first appeared on television. What an unrelated memory to be triggered by the windmill mountain vista! What triggers a memory to surface from the abyss …? For me, it is simply a sight, sound or smell that sets the memory cogs in motion; the windmill of the mind or as the French would say ‘Los moulins de mon esprit" … is that not a song???

Today, I'm interviewing Yvonne Anderson, Science Fiction author about her latest work. Yvonne lives in rural Ohio with her husband of 37 years and one of her four grown kids. Her five grandchildren live in Virginia, which is entirely too far away. Formerly a legal secretary, Yvonne works part time as a Virtual Assistant but spends most of her time on the planet Gannah researching her books. A member of ACFW, The Lost Genre Guild, Independent Author Network, and International Thriller Writers, she serves as contest administrator for Novel Rocket, named four times to Writer’s Digest list of the 101 Best Websites for Writers.

Lovely to have you here, Yvonne, nattering round the Wizard’s Cauldron,  tell us a bit about yourself.

Hi, Ngaire, and thank you for inviting me! I’ve never nattered around a Cauldron before, just a campfire sans Cauldron. So this will be fun. I used to run myself ragged with a mini-farm, kids, and a job. No time to write. Now, my husband and I are in the enviable position of being able to survive on his retirement pension alone. Which is not to say I can spend all my day writing, because I still often have a hard time finding the time. But at least I’m not pressed under the demands of a regular job.

Your series The Story in the Stars is science fiction and getting superb reader comments, please tell us more about your series and how you chose the genre you write in?

It’s a bizarre tale. Not the book so much, but the background behind its inception.

February 2002, the strangest thing happened. My two oldest kids were grown and out of the house, the younger two were in high school. We’d purchased our first computer not long before. On the morning in question, the kids had gone to school, I was cleaning up after breakfast, and an unasked-for thought came along and whacked me upside the head: You need to write a book. Huh? Where’d that come from? True, I had the time (no one home to interrupt me! With my husband now retired, I could use some of that…) and a computer. But what would I write about? I tried to block the thought, but it dug under my skin and wouldn’t back out. I finally concluded it was the Holy Spirit, not a tick, so I sat down and talked to God about it. “Surely I’m misunderstanding You. This can’t be what You want.” But He kept pressing, so I finally yielded.

A short time later, I picked up a little nonfiction book I’d heard some friends talking about. It was a reprint of a book written in the 1800s titled The Gospel in the Stars, and it explained the premise that when God created the heavens and the earth, He arranged the stars in constellations for a specific purpose. Together, they portrayed the gospel story so that early man could “read” it and learn about the Christ who would one day come to redeem their souls. I found the concept intriguing, but I had a hard time with the book because the language was archaic and the technical concepts were unfamiliar. At first I thought it might be fun to “translate” the book, put it into language that a modern reader could enjoy, but I realized I needed to understand it all a bit better before I could do that. Then it occurred to me to write a fictional piece in which the characters discovered this story in the stars. (So much for “never again”!)

I could have given a tale like that any setting I wanted, but perhaps because I’d just been reading about astronomy and had stars on the brain, I gave it an outer-space setting. Once I started writing, I really got into it, and before I’d been at it very long, I realized this was what I’d been studying for all those years.


How many books have you written?

Which is your favourite?

My favourite is The Last Toqeph, the fourth and final in the series and as yet unpublished.

What was one of the most surprising things you learned in creating your books?

Do the characters seem real and believable? Can you relate to their predicaments? To what extent do they remind you of yourself or someone you know?

In my opinion, the characters are eminently real and believable. I have a hard time remembering sometimes that they aren’t flesh-and-blood people and that Gannah exists only in my mind. I keep wanting look online for photos of the place. Since the characters live in another time and another world, their predicaments aren’t much like the situations I face in my own life, but the underlying issues are the same: love and resentment, pushing through tough times when you haven’t the strength, faith and doubt, difficult choices to be made and uncertainty as to where to go for reliable guidance. Alien though they may be, the characters are in essence very human.

Are you traditional or self- published, and has your publishing experience been what you expected it to be? Would you change anything?

In 2011 I signed a three-book contract with Risen Books, a small press. Very small. One-man small. This qualifies me as being traditionally published but doesn’t provide me with the kind of support a major publisher can afford to give their authors. (Not that any publisher does much marketing these days anyway.)

I didn’t have many expectations when I signed the contract, so I can’t say the experience has disappointed me. Nor can I say I’d change anything, looking back on it.

It’s been a valuable learning experience. The contract offer came at a time when I was giving serious thought, once again, to hanging it all up, so it encouraged me to keep going. I’d never thought of Stars as part of a series.

Now, thanks to Risen Books’ interest in it, Gateway to Gannah is a complete, four-book series (though only the first two titles are published) and I’m absolutely delighted with it. I love-love-LOVE the way it wraps up in the last book, and the fact that the publisher doesn’t seem inclined to move forward with producing the rest of it doesn’t bother me. There are a lot of options available to authors these days, and one dead end isn’t the end of the road.

Can you tell us about your current work-in-progress?

With the inestimable help of my critique friends (a different group from those I started with, but all wonderful, talented writers and dear to me personally), I’m putting the final polish on Book 4. I’m also mentally working on my next project. I’m excited about it, too, but I can only concentrate on one thing at a time, so I’m not ready to discuss it yet.

How do you market your work? What avenues have you found to work best for your genre?

And I’ve sold a few books, but it’s been only a trickle at best. Now it’s dwindled to a slow, lazy drip. I haven’t found anything that I can say really works.

Blogging has consumed a great deal of time but yielded little to no results. I used to post to my personal blog three times a week without fail, but the past few months I’ve cut back because it wasn’t proving to be a wise use of my time.

I post every 2nd Wednesday on Speculative Faith, a blog for readers and writers of Christian speculative fiction. I’m a member of the Novel Rocket team, a blog that’s been named by Writer’s Digest as one of the 101 top websites for writers five years out of the past six.

My role there is contest administrator for the Launch Pad Contest, Boosting You Out of the Slush Pile, a competition for unpublished novelists. I’m also a weekly contributor to the writers blog The Borrowed Book. But it’s been busywork, for the most part, not useful for stimulating sales.

I don’t pay a lot of attention to criticism. If several critics tell me the same thing when I’m working on a chapter, that’s worth taking seriously. But where reviews are concerned or general criticism, I figure most of that is just a matter of personal opinion.

I don’t expect everyone to agree with me so it doesn’t upset me when people don’t. On the other hand, my favourite review to date is a 1-star of The Story in the Stars on Goodreads. ( :-), Ed!) The reviewer’s comments reveal that she understood precisely what I’d hoped to portray, though I didn’t wish to offend anyone.


Once I got past the sting of her words, I realized that her comments were exactly what I needed to hear: I had, in fact, gotten my point across effectively.


None of the good reviews gave me that confirmation. The best direct compliment? A friend told me she read Stars twice: the first time, she read fast because she couldn’t wait to see what happened next. Then she read it again just to
savour it.

Whom would you give this year’s Nobel Peace Prize to, and why?

Good golly, I have no idea. Because I’m an ignoramus.

The magnificent Aung San Suu Kyi - her story is inspirational

Nope, no bucket list. My goal is merely to take advantage of opportunities the Lord offers, go through the doors He opens. That alone can lead to some unexpected adventures.

What book are you reading now?

The Children of Men by P.D. James.

Finally, Yvonne, where can readers buy your books and find out more about you?

The first two titles in the Gateway to Gannah series are available in print and ebook formats:

Book 1: The Story in the Stars at Amazon, and B&N.

You can learn more about me and the Gannah series on my website, Y’s Words, connect with me on Twitter, or, if you insist, on Facebook, though I’m scarcely ever there.

Yvonne, on behalf of the absent Wizard and the Wizardwatchers, I'd like to wish you the best of luck and thank you for coming around the Cauldron.

Thanks, Ngaire, for inviting me to visit. It’s been fun!


Ngaire Elder can be found most days on Twitter. @ngaireinfo and also around this blog. Check the bottom right.