Earlier this year, top children's author Ngaire Elder conducted a series of interviews with a variety of authors around the Cauldron.

Check for some of these on the right column as you look. They're good.

They were well received by wizardwatchers and by popular demand, Ngaire is going to be joining the Cauldron every month or so to demonstrate her pithy, humorous brand of interview.

Today, she meets, for the second time, writer Mark Barry, author of seven novels including this month's release "Violent Disorder".


From Nottingham, a father of one son and a passionate supporter of Notts County Football Club, the oldest football league club in the world, the two spoke on the phone as the dispute between Spain, (where Ngaire lives, in a fourteenth century castle in Jerez) and the UK (where Mark lives, in a flat), boiled over in the background.
__________________

Hi Ngaire. Lovely to be back on my show...

Haha, lovely to have you. You have recently published a novel, Violent Disorder, the long awaited sequel to your bestselling novel, Ultra Violence, tell us about it.

It’s about two brothers, supporters and ex-hooligans at an East Midlands football club, Notts County, the oldest league club in the world, who tell more of their tales to the young Internet writer who wrote the first book. 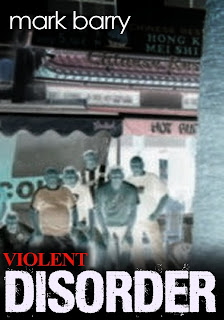 All the time, the spectre of the modern world overwhelms them and there is a big match coming up against a team with a massive gang of hooligans. Will they retire gracefully? Or will they join in the Saturday afternoon hi jinks and risk everything on one last fight.

Were there any aspects of the book that were difficult to write? And, what did you hope to achieve from writing Violent Disorder?

No, I’ve only ever written one difficult book and that’s Carla. That was a complex book in many ways.

Simple on one level and multi-layered on another. Violent Disorder was a relatively easy book to write.

What do I want to achieve? I want the readers to have fun and enjoy the books. My two football hooligan novels are based on real people, real stories and mythic events. Ultra Violence sold far more than I expected, and I hope the sequel, Violent Disorder, does the same. 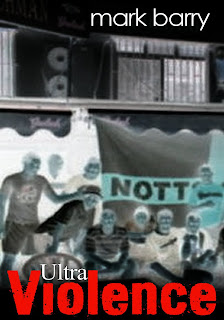 What was your favourite chapter (or part) to write and why?

I like the Peterborough chapter. Bonkers. You have to read it to believe it. I can scarcely believe it myself.

Is anything in Violent Disorder based on real life experiences or is it all purely imagination?

This is a work of pure fiction. Honest, guv. Your background of psychology, did it come in useful, did it help you research and understand the behavioural aspects associated with sports violence?

Not really. There is a chapter in there about zero-hours contracts, which I compare to Seligman’s experiments on dogs in 1974.


All my books are couched in Psychology, particularly some of the wilder experiments and darker areas. In both books, my background in history was much more use to me.

Some of the behaviour exhibited by the gangs in both of the books go back a thousand years, and I draw parallels all the way through.


“High-profile outbreaks of violence involving fans are much rarer today than they were 20 or 30 years ago. The scale of trouble now compared to then doesn't bear comparison - either in terms of the number of people involved or the level of organisation. Football has moved on thanks to banning orders and better, more sophisticated policing”. (source http://www.bbc.co.uk/sport/0/football/22158585 David Bond)

Would you agree with this statement?

I would. William has it tighter than a drum nowadays, guv, but it still goes off, mostly in the lower leagues where there isn’t so much policing and CCTV.

The EPL is too high profile, and there’s too much money involved for the likes of hooligans to spoil everyone’s day out. No lower leagues. I hear that hundreds of Forest and Derby turn out at Alfreton Town in the Conference, for example. Here’s an extract…

I mean, he said, a bit drunk and earnest, Forest are down to a hundred now, if that. Probably less. You think we’re old c**s? They’re all even older. They’re past it. All dead or claiming pensions. They don’t bother going. Notts have more lads – more young lads any road. Anyway, forget them – if you want a scrap, you have to go lower division.  Conference…Alfreton Town versus Grimsby. Grimsby versus Mansfield. Any contest involving Lincoln. Look at Nuneaton. 80 arrests. 150 old LTE trapped on a Nuneaton Council Estate. Three hundred locals putting the windows through.  A thousand coppers keeping them apart. Planned for months. Look at Stockport vs Kiddy last week. Rioting in the Town Centre. There’s no trouble in the EPL. You’d be lucky to find a Chelsea hooligan nowadays. F**k the Football Factory…I mean, you may as well read historical fiction as that c**t. Nah, Forest has been over-policed for years and the young uns come down here. No coppers.
Don’t they get on now? HobNob asked. Notts and Forest?
Renfield wiped his nose on the back of his hand and nodded. Yep. Not like our day.


What has been the toughest criticism given to you as an author?

The first criticism of Hollywood Shakedown. I received before I started Green Wizard. It was two boots in the face stuff and luckily, seven books on, I have yet to have anything like that level of criticism. I've been lucky. The vast majority of my reviews have been positive.
_________________

Best book I've ever read but crying at the moment. I have borderline personality disorder and could relate to this just wish there was a happy ever after for John and Carla  (Carla, Megan, Amazon, 2013)

I've just seen a seriously evil review of a book by one Richard Long, a horror novel called The Book of Paul. It's a horrific review and he's gone potty about it. I think the review, by one Linda Pepper, has gone all over the internet. Danged if I'd like that one on my Amazon.

What has been the best compliment?

My best is Mary Quallo’s review of The Ritual (on Amazon). Made me proud to read it. Also the moment when Brenda Perlin, in conversation with me about Carla, said I write like JD Salinger. That made me buzz.

Also, If you check the interviews on the Cauldron, Jo (Lelani Black) recommended Carla has one of her three Desert Island Books and I was well chuffed with that.

All of my friends have been kind to me and I've met so many through writing these books that I treasure all the good stuff. I read the negative stuff though and am glad people have taken the time to criticise the work.

I also notice when people haven't finished one of my books. This has been noted, gang...hehehehehe...

Is there an Author that you would really like to meet?

We are blessed, aren't we. All these terrific people.

Right, Mark. Some lovely people out there. And wonderful writers.

Too right! Of the “name” writers, I’d like to meet Martin Amis, my literary hero, though he is supposed to be a bit arsy, so I might skip that.

How do you market your work? What avenues have you found to work best for your genre?

Like most Indie authors, I use Facebook, Twitter and Pinterest. I have four blogs including this one. I also use other sites including Library Thing, Shelfari and Book Matchers. My books can be found in many different places on various profile sites.

The chap who founded Proctor and Gamble, the washing powder company, once said that we know that 50% of advertising works – we just don’t know which 50%! I guess this sums up how I feel about which is the most successful avenue.

I recently read that your hobbies include beekeeping and spelunking, care to reveal more about these interests?

Hhahahahahahhaha…I love my beekeeping, and one day will have a hive of my own. I once won £2000 for beehive making equipment on the community farm where I used to work. I was more proud of that than much of the work I’ve done in the past. Spelunking? I shall leave that to your imagination!

What was the last book you read?

“Jacks Return Home” by Ted Lewis, the model for Get Carter. A great seventies book.

Mark, you broke your banning order and were picked up by the cops at the final of Notts County Vs Forest game. Your incarceration officer has a big heart and lets you choose one board game, and a comic from the recreation room and a choice of one of the following: Jolly Ranchers, Spangles or Texan bar … tell us what you choose.

One board game? Hmmmmmmmmmm….Risk. Loved that game.

A comic? My favourite two comics (one story, would be the original death of Warlock and Thanos in Avengers Annual 7 and Marvel Two in One 2.)

Written and drawn by Jim Starlin, these are commonly thought of as highwater marks in comic history. The battle scenes are incredible, the art is sublime, and you genuinely care what happens to everyone involved. Spider Man, watching the battle unfurl involving Thor, Iron Man, Thanos et al, hides in a ventilation duct and say “whoooops, time to get my spider self out of here. I’m way out of my power league!” Which was ground breaking reality for comics at the time and a direct link into today’s realistic approach to superheroes. Unfortunately, these go for about sixty quid a piece in decent nick otherwise, I would recommend them.

Sweeties? Spangles. Jolly Ranchers bring me out in boils and Texan bars have an er, unfortunate look as every school kid at the time will tell you. Along with Nutty bars.

Finally, where can fans of Mark Barry find out more and purchase Violent Disorder?

Amazon US
Amazon US

Mark, I have to go and feed the horses!

It's been a pleasure being on your show and I wish you all the best with Violent Disorder and other books...

Ngaire, the pleasure as always is all mine.