An Interview With Sarah Tipper 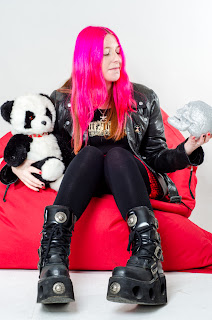 I met Sarah around the time of the launch of the Independent Paperback Gift Shop and took ton her instantly. She is difficult to dislike, never taking herself very seriously and naturally, because (as you will notice) she is a fanatic metal head, that was always going to put her in pole position in my books. Her book is well thought of and is highly original. You'll see from this interview that she is dry, occasionally surreal, articulate and genuinely funny. Because she lives just down the road from me in Oxford, I got on the Wizphone and contacted her at University, where she works as a laboratory manager. Here's what she had to say...

Tell us about yourself, Sarah?

I’m enthusiastic about everything I do. Except putting out bins and going to the dentist.Some people find this charming, other people find it irritating. My favourite biscuit is the chocolate shortcake ring. My religion is heavy metal.

"I studied Psychology at the University of Reading and Health Psychology at Coventry University. I didn’t attend my first graduation ceremony because it clashed with seeing Black Sabbath. " (ST, 2013)

Best band who ever walked on God's Green Earth.

Oooh, that's a tough one...it has to be Supernaut from the Volume 4 album

There's the tribute version (one of them!) Mine has to be Iron Man. I'm still gutted that Marvel comics decided that ACDC ( an average band at best) should accompany the eponymous film. Gutted. Anyway...Sarah Tipper Speaks...

Whereabouts in the UK are you from?

Yep. Building houses on it. So tell us about Eviscerated Panda?

Eviscerated Panda is a book about a thrash metal band. They came together due to an advert placed in a music shop by ageing lead guitarist Phil Winter. Music and the pursuit of female company are the most important things in Phil’s life. He wants to be successful and sow his musical wild oats as far and wide as he can. He’s big on ambition and short on scruples. 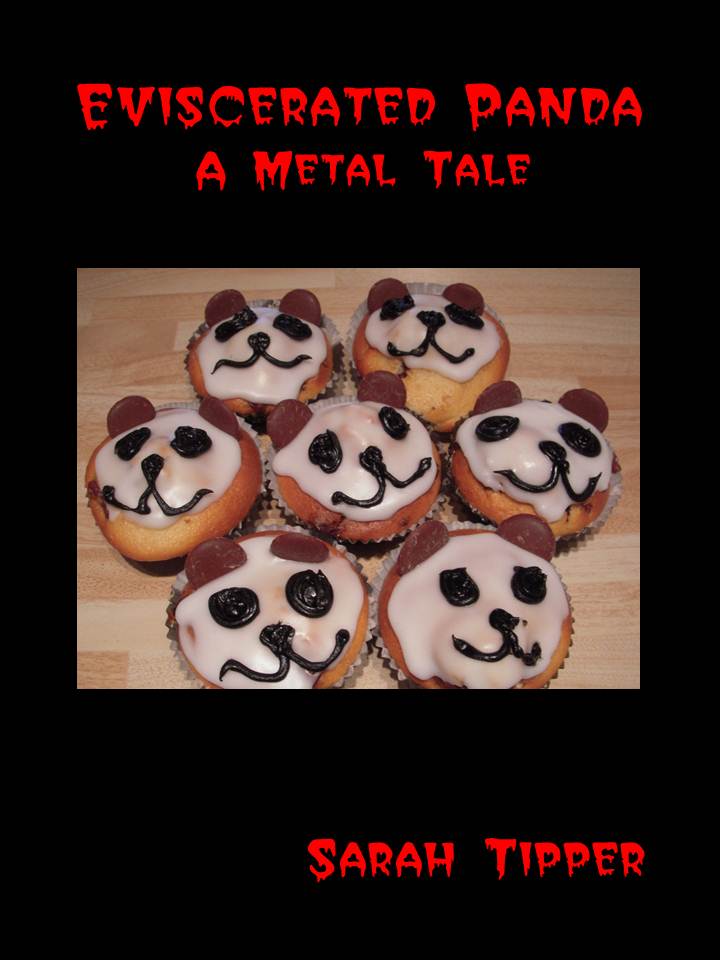 The alchemy of the band is a temperamental thing and there are inevitably squabbles. The band is influenced not just by the musicians in it but also by the whole ecosystem that surrounds it.

It’s a book not just about music but also about life, love, lust and biscuits. You don’t need to know about metal to read it because there is a guide to metal contained within it. For those who love metal it’s a cosy family portrait.

How is the sequel coming along?
Very well thank you. It’s almost at the first draft stage. Readers will be able to laugh as the band plays an April Fool joke on their fans, be shocked when Phil’s girlfriend does a rude thing in a dressing room, go ‘urgh!’ as they wake up in a room that smells of onions and wish they were there when they play a loud gig in Camden.

Heavy Metal plays a big part in your work. Have you always been into metal? Were you a X-Factor groupie before having a Damascene conversion?


I love the passion and the energy in metal. I can’t imagine being as excited by any other music.

I'm exactly the same. Hardly ever listen to any other music...

My Mum claims that as a toddler I used to get very excited when the Bay City Rollers came on telly but I don’t remember this.

I do remember I used to enjoy standing on my Grandad’s feet and being danced around the room to Abba. I never watch the X-Factor. I’m always in the pub on a Saturday night doing vital research for the pub scenes in my books. The X-Factor seems to me to be essentially a soap opera with music being fairly incidental.

Who are your favourite bands?

What do you listen to when you write?

Would you admit to a sneaky musical genre you listen to when none of your Metalhead friends are anywhere about?

I don’t mind good eighties pop/rock music, for instance Adam Ant or early Madonna. I like a little bit of Dolly Parton too. She’s a very wise woman. I try not to listen to her singing ‘I Will Always Love You’ because it gives me a mental image of Burt Reynolds in his little blue pants in the film ‘The Best Little Whorehouse In Texas’.

No matter how hard I try, I cannot find a picture of that, Sarah. So here's a  Burt classic in dark blue trunks... 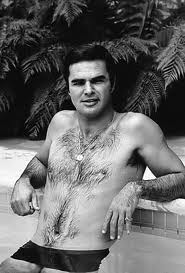 Annoyed at your exploitation of Pandas in your marketing campaigns, three Panda paramilitaries kidnap you after an Electric Wizard concert. They throw you into a bamboo cage. Mu Mu, the kindliest Panda revolutionary, sneaks back and throws a sack in a cage.  In it are three books, two CDs and a DVD. What would they be?


David Nobbs - The Fall And Rise Of Reginald Perrin

The CDs would be Danzig’s self-titled first album

Bloody love Slayer, Sarah. No messing about. No poncey ballads...

The DVD would be The Wrestler, staring Mickey Rourke. When my book becomes a screenplay there will definitely be a part in it for him.

I don't know that one, Sarah. Here's a video from 1975 of Mick McManus versus Catweazle.

Thanks for that, Wiz. *scratches head*

Especially like that one, Wiz.  Eventually I would secure my freedom by telling stories to Mu Mu  a bit like in the Arabian nights, but I’m not wearing those baggy harem pants, I’m wearing something tight and studded. As I get to know Mu Mu better I discover that he and the other pandamilitaries are angry at the Western world’s perception of them as being rubbish in bed. I convince Mu Mu that he should free me on the condition that I’ll spend some of my time writing stories that glamorize pandas. He does and I pen a series of Mills and Boon romances featuring a dynamic and lusty panda. They become best sellers, the reputation of Pandas as monochrome Lotharios is established and all is forgiven. Me and the pandas meet up once a year and have a curry.

Does Panda come to life when you are asleep?

Yes, and when I’m at work. If I come home early he’s not always where I left him.

Your pink hair. Is it difficult to dye evenly? Do you have assistance?

Thank you for noticing my hair!!! It can be difficult to dye evenly so I go to my lovely hairdresser Luke every seven weeks. I read about what Peter Andre is up to in those magazines for ladies. Peter Andre never returns the favour and reads about what I’m doing. In between visits to Luke I dye it myself and my bathroom lino bears many pink stains.

Having pink hair is great when you want to be noticed, less so when you don’t. I was very well behaved at university because of it. When you’re the one pink haired person out of three hundred people in a lecture hall you had better be sure that any question you answer is correct.

I get lots of positive comments about my hair. Small children like to stare at it. My favourite recent comments are ‘Look Mummy, Barbie hair’ and ‘That lady has pink hair. I want pink hair’. I also get old chaps saying I brighten the place up.

Favourite writer and biggest influence on your writing?

I have two favourite writers, Terry Pratchett and David Nobbs. I bought a David Nobbs book on Amazon marketplace recently and it was signed by him to Judy. For a minute I considered changing my name to Judy.

I’m trying to create heavymetalworld in my books, much like Pratchett’s Discworld only louder and with less wizards (my apologies, I’m sure you won’t think less wizards is a good thing). 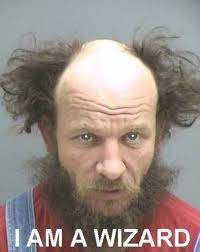 Igor, my Cauldron maker, was not amused by your last comment, but I calmed him down because he likes Pandas...

I am relieved!!  TV shows influence my writing because I find it hard to write convincing dialogue. I love Jesse Armstrong and Sam Bain’s Peep Show and Julia Davis’ Nighty Night.

I will also work on an idea I have for a book called ‘Letters To Songwriters’ in which I ask for clarification on issues in lyrics that have been bugging me for years.

For instance, in Thin Lizzy’s ‘Dancing In The Moonlight’, Phil Lynott sings ‘Now we go steady to the pictures, I always get chocolate stains on my pants’.


What I want to know is why he’s in the cinema either without his trousers or with them partially off, thus exposing his pants to staining. If they are partially off surely he’s got something other than chocolate to keep him occupied. If his trousers are fully on is he foolishly stashing his Twix in his undies leading to staining? Surely he could get a non-melting snack or a man bag? This is the sort of thing that would be addressed in ‘Letters To Songwriters’.

Sarah, its been an absolute pleasure having you round the Cauldron. I wish you - and Panda - all the best in 2013

It’s been lovely talking to you and I thank you very much for your interest in Eviscerated Panda and future works.