An Interview with Dawn White

Why is it some of the nicest, friendliest people write some of the bloodiest, most horrible books? Tomes chockful of gore, evisceration, suppurating fungal pores, weeping sores, bleeding livers, screaming eyeballs, plasma-dripping fangs, cracking bone and mega-violent death?

I don't understand it.  It just doesn't seem right. So, what are these conspicuously angelic people like on the inside?  Sigmund Freud would have his couch full trying to sort this little dilemma out.

Angelic smile and nice as a slice of strawberry cheesecake. Seriously mofo dark and bloody book, by all accounts.

Dawn is one of the many Crushed Hearts and Black Butterfly authors featured on the Wizard's Cauldron in the past quarter and she's as nice as can be, a real lady. Would flip her last dollar in the cloth cap of a stinking travelling minstrel in the Mall.

Yet she admits she tries to write some of the darkest paranormal stuff on the Indielit market.

And living in San Diego, in the sunshine and with the ever present whispers of the Pacific in the ether, cannot be a conducive environment for a paranormal book, but somehow, Dawn manages it.

In an attempt to find out, I battled my way through the paralysing winter snow to get to the Wizphone while Dawn sunned herself on a secluded beach, Cartier fountain pen in her hand and a notepad by her side, jotting down dark and bloody ideas for her next book in "The Damned" series.

Here's what she told the Wizard about what she's up to (when she's not fanning herself under a palm tree, that is!)

So, tell us a bit about yourself.
Okay. I live in San Diego with my wonderful husband and three very busy little girls. I am originally from Upstate New York and look forward to seeing the weather changes when we move back in March.

I’m an avid reader, editor, and dark paranormal author. I love meeting new people and always look forward to getting to know them.

Readers can learn a little more about you here, Dawn.
Yes they can, Wiz.

What's life like in San Diego?
I am not from San Diego, my family and I are only here because my husband of twelve years is stationed here in the military. I miss the weather changes New York has to offer.

That's a pity. Santa Anita races is on my bucket list of things to do. We could have talked about that instead of exploding heads.
Sorry Wiz!

I'm squeamish, you know.
Hahahahahahaha. No you're not! I've seen the rest of your blog!

Okay, you got me. At least you'll have Belmont and Saratoga. So,tell us about your current publication.
The Damned series has kept me very busy as of late. I am on a speedy journey to finish the third book in the series for an April publication.

Tell us about Wingless and the Damned. I understand it sold really well.
It sold quite well. It was my first book I have ever published and I still get nervous every time someone says they are reading it. 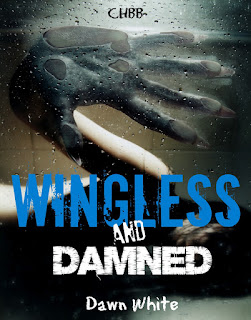 Why did you become interested in the Paranormal?
I grew up with a love for literature. One of the first books I have ever read from cover to cover is Homer’s the Illiad. I loved it!

But my all time favorite books are Anne Rice’s. So vampires and things that go bump in the night have always been at the forefront of my mind while writing.

I tried to read an Ann Rice book. I couldn't get into it at all.
Really? Too squeamish?

Not at all. It wasn't very scary. It seemed more like a chamber piece than a horror novel. There is a rich seam of snobbishness running through every paragraph, a sense of pretty unsubtle homoeroticism and, to be frank, some average writing.
Oh!

Oh well, each to their own. Anyway, annoyed with the success of Wingless, a gaggle of envious Indies dress up as alluring Succubi and kidnap you on the way to the nail bar. You are thrown in a disused nuclear shelter near the New Chargers Stadium.  You find a care package in the corner next to the canned beans and the oxygen tanks. Three books, two CD's and a DVD hide there, underneath prepping manuals. What would you like them to be?

Yikes! I don’t think I would enjoy being kidnapped but the Three books would have to be the Blood and Light series by Rue Volley.

And the DVD I know it’s not very romantic but All Quiet on the Western Front!

What's next for Independent literature? Can Paranormal writing sustain public interest?
Paranormal Literature can and will always sustain the public. It will change but it should stay around for a while. I think at this moment as an indie author and a tiny blimp on the radar I myself am just trying to bring the paranormal bracket back to the way it’s supposed to be; Dark and bloody.

Cats or dogs?
Cats, but I also love big dogs…

What do fans of Dawn White have to look forward to in the coming year?
Book one Wingless and Damned and book two Wingless and Forsaken will be put into the same book. Which will release on January 30th.

Book three of the series Wingless and Shattered will be out in April; putting the finishing touches on it this week. It’s sitting over 104k right now. ;)

Thanks for coming round the Cauldron, Dawn and I wish you the best of luck!
Thanks bunches, Wiz.