An Interview with Bill Jones Jr

One of the great perks of being an Indie Wizard is the pleasure of both meeting new people and people you admire from afar. I hear great things about Bill Jones Jr's fantasy work on a regular basis and I was introduced to him by a mutual acquaintance and wasted no time in reaching got the Wizphone.

Here's what Bill had to say from somewhere over the ocean.

UK readers have heard about The Stream due to your membership at the Independent Paperback Gift Shop. Tell us a bit about Bill Jones Jr? 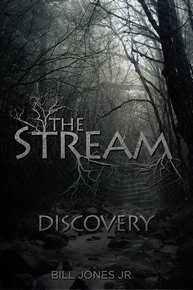 I grew up assuming I would be a professional photographer one day. However, like many kids, I was steered away from the arts and into a “normal” profession in the business world. I’ve had a rewarding career, but I think there’s something inborn in artists that can’t be quelled any other way but through art. I started writing poetry, and had quite a few published in obscure little journals here and there. Then, on a dare from a friend, I decided to try my hand at writing fiction in 2009. I became immediately addicted, and wrote my first two books back-to-back. Now, after having written four books and a short story collection, I’m finally allowing myself to call myself an artist.

Of course, that could just be because my mum finally read my first book, and liked it. If your mother doesn’t think you’re an artist, you aren’t.

Tell us about The Stream series 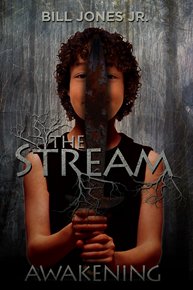 The Stream is a fantasy fiction series starring two brilliant adolescents, Charlie and Robin, who discover they share the ability to walk into and influence others’ dreams. Charlie’s vivid dreams are initially merely an escape from their shattered family lives. They jounce from one adventure to the next, amidst warm-blooded dragons, mythical creatures, and increasingly, a growing darkness. There is more to the land of dreams – the Stream – than sleepers, they learn. Something there has trapped Charlie’s best friend, his great grandfather, and he and Robin will stop at nothing to find him, and bring him home.

Always been a big fan of your covers, BIll. The former has something of the "Shrooms" and "Blair Witch" about it.

Thank you, Wiz. They're pretty sharp.

Who is your target audience? Are you a primarily a YA author?
Although my main characters in The Stream are 12, the books are actually targeted at adults. There are dream adventures based on history, re-imagined mythologies, as well as some fairly adult themes.

There is no language or sexuality that’s inappropriate for kids, but my “perfect reader” as I imagined her, was a parent who loved the Harry Potter and Narnia series, but pretended they did so for the sake of the children.

I believe the books are appropriate for ages 12 and up. While I enjoy YA fiction, and have kept all 3 books of The Stream safe for younger readers, most of my other work is targeted directly at adult readers.

Since I have a day job, I am a strict 2,000 word a day writer. I actually started writing novels during the National Novel Writing Month (NaNoWriMo) in the U.S., and found that format (write a bit each day) fit the fact that I had to drag myself out of bed early every morning and go to work.

If I were stinking rich, and could write full time, I’m sure I’d turn into one of those book hermits whom you never see for three months at a time while he writes around the clock and forgets to bathe or eat. Hmm, maybe it’s good that I have a day job.

I binge in a way, in that I set aside months out of the year where I do nothing but write. This past June, for instance, I wrote about 100 pages of short stories.

I understand you are a photographer. Tell us a bit about that?
I have always loved photography. My grandfather, with whom we lived, was one of those old gents who always had his camera with him. My fondest family memories were all of us grouped in the living room, looking at granddaddy’s slides projected onto the wall. I also had a great uncle who would come to visit, and never seemed to tire of taking Polaroid shots. So naturally, when I got my first camera at age 12, I was hooked.

I’m sure my photography has been influenced by both men, as I love candid and street photography, and rarely take posed or studio type shots. If you see me without a camera, I’m having a bad day. I do a bit of freelance work, but mainly, it’s for the love. 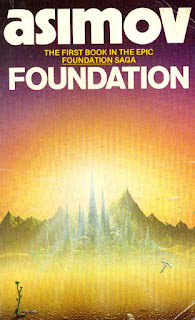 You have been kidnapped on the way to the Walgreens by strange furry purple aliens. You are locked in a spaceship brig. Your gaoler is a kindly alien and allows you three books, two cd's and a dvd. What would you choose?

I would choose Isaac Asimov’s Foundation Trilogy, because I have started, and been interrupted while trying to read those books for 10 years. I am determined to finish them or die trying.

My CD’s would have to be Bob Marley’s “Legend” and probably some jazz, any jazz; otherwise I’d never be able to write.

A dvd would be harder; the alien would probably shoot me before I could make up my mind. Perhaps “The Day the Earth Stood Still” would feel appropriate.

Which writer, and which photographer, would you be pleased to see knocking at your door with two bottles of Claret? And what would you cook?
I would honestly love to see J.K. Rowling show up, not because of the success of Harry Potter, but due to the incredible blend of imagination and detail her books showed. Even more interesting to me, is the determination she showed in going through rejection to reach success. I could learn a lot over dinner I think.

The photographer I’d pick would be Annie Liebovitz. I’ve never been satisfied with my portraits, and she is just the master at connecting with her subjects. Of course, if death were no obstacle, it would be Diane Arbus. Such a talented, tormented woman.

Since clarets are earthy wines, and I don’t eat red meat, I think I would have to cook them my version of my grandmother’s Shrimp Creole. It’s about as earthy a food as you are going to get. Plus, if you want to get a genius talking, a bit of spice with their wine can’t hurt.

What do fans of Bill Jones Jr have to look forward to in the coming year?
In the coming year I will be releasing my first full-length science fiction adventure, Hard as Roxx. In Roxx, in a 22nd-century world that is a distorted hybrid of rigid control and absolute freedom, one woman broke a cardinal rule: she got pregnant, without permission. Worse yet, it was her second pregnancy, in a world where only one is tolerated. The penalty for breaking the One Child law is death. Roxx, however, is not the victim type.

In addition, I will be releasing the final book of The Stream trilogy – Emprise, as well as my first short story collection. It should be a fun year.

Bill, it's been an absolute pleasure to see you round the Cauldron. I wish you every success in the future.

Wiz, the pleasure was all mine!

Read much more about Bill with the wonderful Mary Ann Bernal