"Imbrued" - a novel by Emma Edwards

Think of Wales and you think of so many things.

When I think of Wales, I now add Emma Edwards and the Sanguinary Trilogy to my imagination mix.

I make no secret of how highly I rate Emma. Crystal clear prose, an innovative look at a traditional theme, a coherent story, embedded in real life locations, with sexy, intriguing characters put in extraordinary situations, this is value for money Indielit. Additionally, she's a top quality girl too - easy to talk to, funny and - thank the good lord - someone who doesn't take herself and/or Indielit all that seriously.

Emma took time off from painting her caravan somewhere in deepest Wales to talk to me once more on the Wizphone about Imbrued her long awaited sequel to hot, blood-drenched, cult indieseller Sanguinary.


Hi Emma. Tell us about Imbrued? What is it about?

Hi Wiz, firstly I want to say thank you for having me back to the Cauldron again.

You're always welcome on the Cauldron, Emma!

I'm so glad, Wuz. So Imbrued is the follow up to Sanguinary, which isn't the usual paranormal vampire type of story, it's about a group of humans who drink blood.

Most of the characters are back from book one.  It continues Angel's story and her involvement with the blood-drinkers carries on.  As with book one it brings in some of the more traditional vampire folklore to mix up with these modern 'vampires'.  In Imbrued a slayer has risen and is determined to kill the 'vampires' and it's a fight for survival. And all the other elements of book one are still there- sex, blood and rock 'n' roll.

I knew a real life blood drinker once, Emma.

Yes. She was a librarian from Watford. Nice girl.  Good sense of humour.

How did you meet her?

I met her on the Internet and we were getting it on, but once she started talking about weekend coffin sleeping and drinking blood, I lost interest a bit.

Hahahahaha. I can understand that.

Anyway, enough about me: How long did it take you to write "Imbrued"?
It's hard to put a time frame on how long it actually took me to write either of my books because I wrote them both over about ten years, on and off.  By the time Sanguinary was published Imbrued was also nearly ready, it was just in need of editing.

Who designs your covers?

It's a joint effort between me and my husband. I decide how I want it to look and he does as I tell him...I mean he works the magic.   I wanted the cover to be similar to Sanguinary, to keep with the series theme, yet still different.  We were out shopping for roses for the photo when it came to me that book two should have two bleeding roses.  Bit of a giveaway for book three now though, isn't it?

Three Roses and a Funeral?

Haha, Wiz. Not quite.

What does the title "Imbrued" mean? I remember being impressed with Sanguinary as a title?
Imbrued means stained with blood.  Again keeping with the blood themed titles!

Your working title was Slayer. Why did you change that?

It was Slayer for a long time but it started to feel that the word was a bit too obvious with regard to the plot.  I wanted something more subtle.  And I thought that Imbrued fitted in better with the Sanguinary meaning.  But my son still refuses to accept the change, he still refers to it as Slayer....as do other people...

How do you market your work. Tell us about your recent book signings.

At this stage I've sold a lot more paperbacks than I have e-books and it's good old word of mouth that is the main thing that's selling them. Quite a few times I have sold a book to someone, they have recommended it to their friends and have then come back to me for more (in one case eight more!).

Recently I arranged a pre-launch party for Imbrued at a local hotel.  Again there was a good turnout and I sold quite a few copies, even a few people who were in the hotel bar wandered in and bought a copy of both books.  I always take printed copies of all the reviews that I have received to book signings, for people to browse through.
In the summer I set up a book stall at a caravan park in West Wales on a carnival day.  It went very well and I met someone who has now turned out to possibly be my 'number one fan'.  Stephen King's Misery does come to mind at times.

Let's just say if anything ever happens to Ash and if my online presence disappears for any length of time then I am probably locked up in a house somewhere in the Rhondda Valleys working on some re-writes.  Only joking, she's lovely really!

How much of you is in the book? Is your protagonist a Symbolic You? Is she a you of the past? A you that you want to be?

Angel is very much a part of me, I think that's why I find her so easy to write as character.  A much wilder, crazier part of me though! She likes the same things as I do and we have the same taste in men! She is the younger me in the rock clubbing aspect, she's far more messed up than I ever was though. Maybe she's the me that my younger self would have liked to have been. I'm a bit more sensible than Angel though.

Without doubt, my favourite character is Ash.  Is it possible to be in love with your own character?

One of my favourite characters is the Balloonatic!

He doesn't make the book, Wiz. He entertains on caravan parks.

Can you include him in Three Roses and a Funeral?

No Wiz. The Balloonatic will never appear in my books, hahaha. My favourite scene? So many to choose from. One of the first to come to mind is not actually one that Ash features too highly in though, it makes me smile everytime I read it. t would be a too much of a spoiler to tell you about it, sorry!

Oh. Okay. Another scene that I like, just for the drama is the very end of chapter two. Sometimes I wish that I could sit over people when they read the book, just to see their reactions to certain scenes. That would be a bit annoying for the readers though, wouldn't it?

Do you reread your work? Or do you put it on the shelf (like many writers) and forget it ever existed.

Well, I haven't reread them recently, just because I have been through them so many times whilst editing them both over the past few months.  But I am sure I will go back to them, I've read them loads of times but I never get bored.  I would never forget about their existence.  But I am a bit obsessed with my books.  My three tattoos are all relating to the books, I've got a rose, bat wings for Ash and my latest tattoo, Angel wings for Angel.

Are you happy with the response to your work? Is Imbrued fundamentally different to Sanguinary as a result of criticism and observation by your readers?

I'm more than happy with the response that I've had to Sanguinary.

When I published it I had no idea what to expect but the feedback has been very positive so Imbrued is essentially the same as Sanguinary, a continuation of the story.  The one issue that I have found with the readers of Sanguinary is that there is a big divide between the female fans of the two main male characters, some much prefer Ash, others Jay, so I try to keep in something to make everyone happy...

And finally, Book 3. What's the working title, and when can Emma Edward's fans expect to hold it in their hands?

The working title is Exsanguinated, but as you know Wiz, I am prone to changing my mind.

One of the world's most famous Exsanguinates...
Richmond off the IT Crowd...

I don't have an exact date as yet, it's only at about 20,000 words so far (both of the other two books come in at over 150k between them), so it's a long way off yet but I would hope that it will definitely be ready sometime in 2013.

Emma, once again it's been a pleasure talking to you. It wouldn't be the same though without saying goodbye to your devilish pooches... 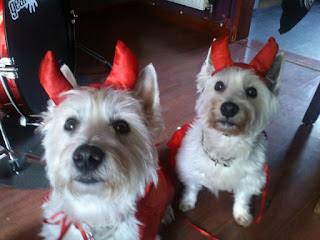 ...and I shall review both books after Christmas. As you know, I'll be reading both copies over Christmas! The best of luck to you in 2013...

Thanks again, Wiz, it's been a pleasure as always!

For more information on Sanguinary and Emma Edwards, see the original interview here: