An Interview with Kim Carmichael

Kim has been writing for eight years. A resident of LA, she is firmly in the modern wave of New Romantic writers (not Duran Duran and Spandau Ballet and that, not that kind of New Romantic), and she makes no apologies for it.

You'll see that through the interview.

Part of a movement which seems to be consigning the crusty hospital waiting room fiction of Mills and Boon to the recycle bin of history.

Her stories are youthful, vibrant and sexy (steamy, to use her word) and if they resort to stereotype, its only because that is the biggest weakness with genre-based fiction of this nature; stereotypes save ten thousand words of exposition.

Closure, her latest work, is garnering praise and a bit of a buzz around the watercoolers at Crushed Hearts. I picked up the Wizphone and caught up with her during a writing break in her apartment, which, perhaps in my imagination, overlooks the skyline penetrating the Los Angeles night.

Tell us about yourself, Kim. How long have you been writing. Where do you live? Are you a full time writer? Do you have a career?

I have been writing for over eight years, until then, I made up music videos in my head.

I spend all day thinking about writing, but I do have a day job.  I actually really love my career.  I work in skin care helping the beautiful become more beautiful.

What genre do you write in? What draws you to this genre? Do you work in any other fields?

The former, I think.

I'd love to see a romance novel in which the protagonist looks like this?

It will be different for one thing. Okay. Kim, take Wizard Watchers through your current project?

I was always the outsider in high school and every now and again I wonder what happened to all those people and what they would think of me now.

Closure is the tale of Margaret, and outsider, who had her heart broken by the one boy she thought cared for her. 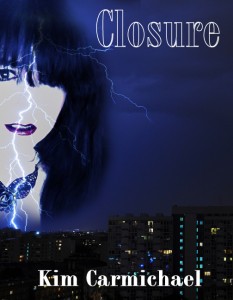 Years later, she has reinvented herself as Riley and is confronted with her former love who doesn't recognize her.

The story explores that one love you can never forget, and what it takes to heal old wounds and move forward, basically what is needed to have closure.

Is that you on the cover?

I am seriously impressed. You look terrific.

I'll have to ask my mate Dawn at Dark Dawn Creations to put me on one of my covers.
.
.
.
Ahum. Okay: How does living in an urban metropolis like Los Angeles influence your work? Would it be structurally different if you lived in, say, Black Oak, Arkansas?

I seem to center all my stories around places I know, so I do base a lot of my stories in Los Angeles.  There is a certain vibe to the city that is different than living in a more rural place.  I love to put things totally inherent to Los Angeles in my work.

You are spotted in the Pineapple Grove Mall shopping for shoes by several depraved members of a Saturday-night Swingers and Sacrifice cult. As you are famous Hot Ink Press writer, you are highly prized. Thrown in the back of a van and taken to a disused church in East Hollywood, you are abandoned in the basement to be prepared for the Winter solstice hi jinks. Horace, the harmless, but hunchbacked janitor of the old church, and your sympathetic gaoler, offers you three books, two CD's and a DVD to pass the time. What would they be?

Flowers in the Attic by V.C. Andrews. It's a classic.

Full trailer for mega selling goth-trembler
Flowers in the Attic

Warrior's Woman by Johanna Lindsey - I have to stay true to my genre and it's just pure fun.

Phantom by Susan Kay (of course the last time I read it, I cried until I threw up, but then again maybe it would get them to release me J)

CDs: The Smiths – Strangeways, Here We Come. It’s the Smiths and this is the album where Morrissey growls.

The Patsy Cline Story: It has all her greats and a song for just about every female emotion.

The Princess Bride - Since I've watched it so many times that I already know the lines, I suppose I won't get sick of it

A writer and film maker knocks on your apartment door with a bottle of bubbly and a family sized bag of honey roast. Who would you like them to be and what would you choose to cook?

and I wish I would have had the opportunity to have dinner with Nora Ephron because she made some of my all time favorite movies and really understood romantic comedy.

Even though my Master's degree is in Food Science, I am not a gourmet cook, so I would go with something sure to impress (I am from LA after all) but that I can also cook so:

Filet Mignon with a red wine sauce. I know how to make this with no recipe.

Green Beans, because you have to have a veggie.

Coconut cake for dessert. Just because I love coconuts and I think coconut cake is sexy!

Can you really cook all that?

It sure does. I am officially envious. I'm sure you and Isaac will enjoy it.

How do you relax away from the world processor?
I am told I have two speeds, on and off.  So if I'm not writing or working I'm usually passed out.  But I do crochet (don't judge me) and I love anything on Bravo (again – no judging).

I hope so!!  I am doing an "alterative-lifestyle" novel that is my baby, but I wanted to write it as a traditional romance.  So we shall see what happens.  I am also editing the Spring Fling Anthology for Hot Ink and have a lot of irons in the fire.

Kim, its been a pleasure to talk to you. I wish you every success in the future and good luck with your new project.

Thanks Wiz. It's been fun!