An Interview with Wayne DePriest

One of my earliest childhood memories (apart from accidentally burning down my stinky Aunty Ethel’s coal shed, blaming my entirely innocent younger brother for the caper, and getting to wear a fireman’s helmet as they hosed down the flames), was watching sixties TV western serial, The Virginian.

I became a big Western fan and when I heard there was a Western author hanging around the Indielit watercooler, I wasted no time in proposing a pow wow around his Teepee.

His name is Wayne DePriest, writer of “Angeltown” and he’s originally out of Montana. (I love this job – last week Maine, this week Montana; two of the most beautiful places on God’s Green Earth!)

As it was, Wayne couldn’t make the meet-and-greet as there is a dirty great pond between us and he was too busy [playing pool, so Wiz got on the Wizphone to discuss matters originating in the Old West. And other matters of course.

Great thanks. Looking forward to this...
Me too.

Montana in relation to the other States

Born and raised mostly in Montana, I lived in a log cabin as a boy. the cabin was four rooms and came complete with cast iron wood-burning stove (for which I chopped a goodly sum of firewood), a water pump with a handle and a distinct lack of indoor plumbing.

I really did walk a mile to school.

I am making a (somewhat less than serious) walk for the Presidency of the United States under the banner of The Cookie Party.

Hahahaha. Well, it worked for Ronald Reagan...
It did yes, but he had nothing to do with Cookies.

And he was totally insane! Anyway, enough politics. So, why did you start writing? I haven’t the foggiest notion why I started writing. Nor did I ever think of myself doing such a thing until I did. One day I wasn’t a writer, the next day I was.

I recall writing a particularly lurid piece of drivel in Junior High. My friends thought it was delightful and made copies. One of these copies came back to me in the hands of the Principal.

He was somewhat less than amused.

Several years later I wrote (actually wrote it in longhand) an atrocious novel based on a telephone number and the effects it had on three different lives. It was trash and I knew it. But it was my trash. Wish I still had it.

My father threw away my first novel accidentally. And the issue of NME with Slayer on the cover.
Did he?

I don't think he did it on purpose.
I don't think he did either, Wiz.  Anyway, over the years I continued to write a bit here and a bit more there; silliness for the wife and children. In 2006 I began to take it more seriously with when I had a go at National Novel Writing Month. 50K words in 30 days. My mystery book “Selected” is the result. That seemed to open some sort of floodgate which I haven’t managed to close off just yet.

In 2010 I returned to NaNoWriMo and wrote the western Angeltown.

Last year I wrote more than 100K during NaNoWriMo, split almost evenly between two books, one a western and one a story of a man getting involved in a friend’s murder.

You're extremely prolific, then! What's your latest project?
Which one? hahahahahahah. I have eight distinct projects in various stages of completion. 1) An illustrated book of poetry for children is in its final pre-publication stages. The illustrator is a wonderful lady and artist from Pennsylvania via Russia; 2) a collection of short stories called “Second Chances” which will be released for various e-devices and in paperback in the next week or so; 3) the western from NaNoWriMo last year; 4) the mystery from NaNoWriMo last year; 5) a mystery/thriller called “The Button Man”; 6) Button Man’s sequel called “It Only Takes One”; 7) a collection of short stories prompted by single sentences provided by a friend in Denver, Colorado. The hook is that my friend is the main character in each story and I arrange his timely (or untimely) demise in each story.

Angeltown is my latest book. 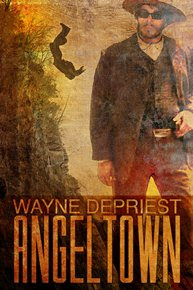 You're welcome. Give us an insight into a typical writing day in the DePriest household? Are you a binge writer or a methodical, two thousand a day one. Writing usually begins a bit before 10 in the morning. I work on whatever strikes my fancy. That’s the beauty of having more than one thing going at a time. This month I make certain to complete the daily requirement for the short stories featuring my friend. I only get 24 hours to produce a story after I receive the prompt sentence. Each story must be at least 1500 words.

"I don’t know that I’m a binge writer, though I do write quickly. I have little difficulty cranking out 4000+ a day. I think it’s easier if one has more than one project ongoing. I take frequent short breaks and am usually done by 6PM, when I cook supper and spend the evenings with my lovely bride of 35 years. sometimes I return and write until the wee hours."

What attracted you to the Western ? What do you class as the key moments in that genre? Growing up in Montana with its history certainly didn’t hurt. I read a lot of westerns by James B Hendryx, Zane Gray, William Colt MacDonald, Max Brand and many others. It was, in many ways, a time of simpler morals. Right was right and wrong was wrong. Not a lot of gray areas. One was judged far more on actions than on words. I think an author of Westerns must reflect that idea within the framework of the story.

The story of the West was far less about gunfights and Indian raids and cattle rustling than most would like to admit. It was a hard life for both man and woman and demanded the best from each of them. And sometimes that best wasn’t quite good enough.

The James Gang are on the run out of Missouri and the Pinkertons are closing fast. They kidnap you from your cattle ranch as a hostage and lock you up in a disused mine on the Oklahoma border. Your jailer, Bart Younger, a little known family member, is a kindly and simple soul and allows you three books, two CD’s and a DVD to pass the time. What would you choose?

“Catch-22 by Joseph Heller because every time I read it I get something else from it; “Ishmael” by Daniel Quinn for the same reason; “The 2548 Best Things Anybody Ever Said” by Robert Byrne because it makes me laugh.

Hey Wayne, did you know that the childhood ambition of every forty (ish) bloke in the Green and Pleasant was to grow up and marry a dancer, thanks to Top of the Pops, Sarah Brightman and Pan's People!
I didn't know that. I can see why!

Never got to marry a dancer. Married a bus driver instead.
That's a shame, Wiz.

She was nice though. Liked a good natter. Anyway, a DVD.
I'd take Blazing Saddles by Mel Brooks because ‘Mongo is just a pawn in game of life’.

Which writer or artist would you like to accompany on a Midwestern cattle drive and why? I’m going to take some liberties and offer one of each. Author: Louis L’Amour. He traveled the country of his stories. The trails and waterholes and caves were right where he said they were in his books. Artist:: George Catlin: Have you seen his paintings?

I have now. Absolutely beautiful.
They are, aren't they!

What do fans of Wayne DePriest have to look forward to in 2013! Oh, heavens! Hopefully some good writing. I suspect another round of short stories. And another volume or two of poetry. Certainly the publication of the current projects, if they don’t see the light of day before then.

Wayne, its been great fun talking to you and I wish you every success in the coming year.
Thanks Wiz! And the same to you...

Buy Angeltown, and that magnificent cover, from: