An Interview with Michelle Gent

During one of the fan sharing events I seem to spend most of my life involved in, I came across author Michelle Gent beating up an online troll and not showing any mercy.

The troll fled the battlefield with his tail between his legs. Impressed, I reached for the Wizphone straight away to see if she fancied a natter.

One of the new wave of  global YA paranormalists and deep seam miners of the supernatural (and soon to be a film director), Michelle is so busy at the moment, I was lucky she could spare the time. Wizardwatchers will be pleased she did.

Michelle donned her leathers, straddled her Ducati superbike and headed down from Sutton to Southwell to have a natter with the Wizard over fruit meringue and Thor's Hammer in the Rodney. A barrel of laughs and a prolific writer, her restless energy powered the interview all by itself...

You're a new face on the block in these parts. Tell us a bit about yourself.
I’ve been working since my first paper round... age 12 or 13 I think. I then went on to the heady heights of washer-upper at a restaurant and then added to the hours by working nights at the same place - glass collecting - well before I’d left school. I think it’s illegal to employ under -16 yr olds in nightclubs these days! I’ve been a factory worker in a few factories (one of which was my own). I’ve made clothing for M&S in the 80s, I made cars at Toyota and I made merchandise for my own company. You remember Robbie Williams’ Rock DJ pants? I made them! Yes, really! I’ve been a Bouncer at a number of nightclubs, a Dining Hall Manager at one of the local schools (technically I was still the Bouncer) and I’m now an elected government official at County Hall, Nottingham.

… and soon to be a Director of a film based on one of my books – Dusty the Demon Hunter.

I’ve been married for 26 years (I met him while I was still at school, he was one of the ‘bad lads’ and we have two children and a granddaughter.

Football? Blergh! I made my living making merchandise for footy teams but I don’t really follow or watch football. I’d rather be on my motorbike – I have a Ducati 900Monster.

You're from Sutton-In-Ashfield.  Quite a few Wizardwatchers originate in the East Midlands and will know the area well. How does your environment affect your writing?
It’s brilliant! I live in the heart of Sherwood Forest (technically) what’s not to like?
I write about the towns and areas that I know best. Mansfield features heavily in my first and third novels and I mention Matlock Bath in the first one too. People that really know the area will be able to spot some of the places I write about. I like dropping little factual snippets in, it makes it more fun for me.

Tell us about your latest project?
Just one? I have a handful of them! I’ve just finished Producing Exorcist Chronicles with Director Philip Gardiner – that was an AWESOME experience. As I said, I’m writing the screenplay for Dusty the Demon Hunter movie, coming soon.

I’m in the middle of writing my 4th Wolf series novel – Ancients and Gods. I have a few more irons in the fire too – Diamonds and Deviants, Dusty 7, and another collaboration with Philip Gardiner – Paranormal Possession. I think that’s all of them... maybe...

Are you a tattoo buff? What's the story behind your tattoo and what does it mean?
I have a beautiful tattoo. She’s the character from my Wolf series. Her name is Hazel (Red to her friends). I gave the wonderfully talented Tattooist, Theresa Gordon-Wade the pictures of the flowers, the necklace, the eyes and the first chapter of Deadlier... than the Male and she drew her.

The other part of the tattoo is a large clawed hand which seems to burst from my shoulder blade to ‘ruin’ the other tattoo. That’s a representation of the dragon within me that sometimes bursts out to make its presence felt.

Away from the word processor, what does Michelle Gent do to relax and take it easy?
Relax? Take it easy? I know nothing of these words... what do they mean?
This year has been literally nonstop for me. We went away for my husband’s birthday and met up with two dear friends to celebrate her birthday too but since then (January) that’s it – nose to the grindstone, nothing but work, work work. It’s really a good job that my work is so much fun!

Oh and I go to the gym J

So do I, Michelle!! A gang of hard core Mansfield hoods see the chance to make a million by taking you hostage at gunpoint while you potter in the garden. You find yourself imprisoned somewhere near Shirebrook. Derek, your gaoler, is a kindly soul and allows you three books, two CD's and a DVD to pass the time. What would you choose?
They’d have to get past Bear first (my Rotweiller) and as my husband says, they’d be bringing me back before tea-time..

Anything Terry Pratchett or Stephen King in the books, I just love those two or something on mythology – a large tome of mythology (or history) would set me right and keep me quiet and if I had a notepad and pen so I could write, they’d not be bothered by me.

CDs – Aerosmith Big Ones and possibly Alanis Morrisette Jagged Little Pill are my favourites at the moment... unless it’s December, then I just LOVE blasting out the Christmas songs!

Johnny Depp on stage with Aerosmith

I can watch many movies time after time but nothing in particular. Perhaps Gone with the Wind would be a good one... excellent story and it’s long enough to keep me occupied so I wouldn’t get into too much trouble by thinking up ways to damage my captors J

Tara's Theme to Gone With The Wind

With which writer would you like to share dinner with? And what food would you suggest? Would you cook or go out?
Stephen King I think... or Terry Pratchett... perhaps Neil Gaiman...

I like venison (only tried it for the first time just recently).
Me, cook? Just wait while I stop laughing...

Sweet tooth or savoury?
SWEET! Or fruit... yep, fruit and meringue and lots of cream.

What do fans of Michelle Gent have to look forward to in the coming year?
Ancients and Gods, the 4th Werewolf book in the series (see above: Ed!) 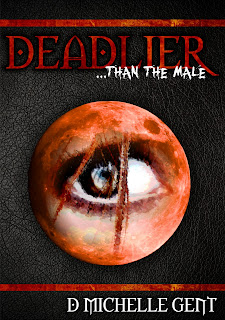 And you never know... there are two more works in progress that I might pick back up again – ‘Daughters of Le Fay’ and ‘Biker’

Michelle, thanks for coming down the A614 to speak to us and I wish you all the best for the coming year. By the looks of it, you're going to busy!!

Thanks Wiz. You rock!

You can contact Michelle in a wide variety of places including: