Devorah Fox, a New York born, now Texas based writer, appeared on the Cauldron last year and the interview was one of the surprise hits of that period - indeed, any period! #
Personable, funny, exceptionally professional, when I found out Devorah was planning to release her latest work "The King's Redress", I wasted no time in picking up the Wizphone to ask her to come back on the show.

I caught up with her at the beach as she practiced her sand castle sculpting.


Tell new Wizardwatchers briefly about yourself, Devorah.
I’m a writer. I write all day long, practically every day. If I’m not writing I’m thinking about writing. I wake up with sentences forming

I write fiction and nonfiction, instructional material and novels, blog posts, magazine articles and a newspaper column but it’s all about telling a story. And there are so many stories to tell. 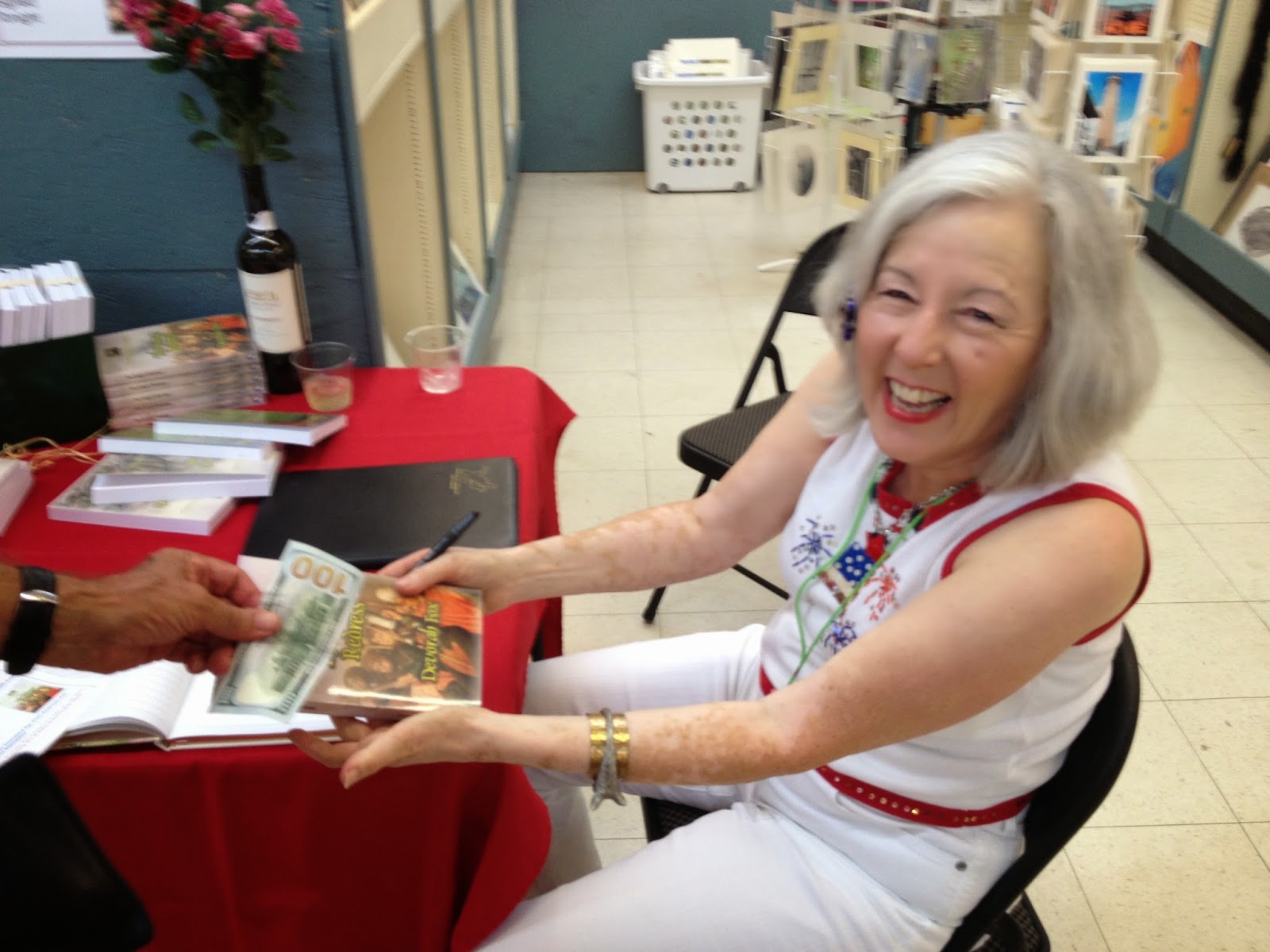 Running a publishing company is a full-time job. It’s challenging and rewarding in its own right but it's a lot of work.

How has the world of writing treated you this past year? Has it been productive?
I’ve been busy, that’ s for sure. I launched Book Two in the King Bewilliam series, The King’s Ransom, completed Naked Came the Sharks which officially launched the first weekend of January, 2014, and had several magazine articles syndicated.

During the November 2013 National Novel Writing Month marathon I started The King’s Redress.

Tell us about your latest work
January 2014 saw the launch of Naked Came the Sharks, a contemporary thriller of murder and mayhem in the Texas Coastal Bend. The next time you have a cold, dreary day, dive into Sharks. It’s set during the summer and comes complete with characters sipping margaritas in ninety-degree heat. 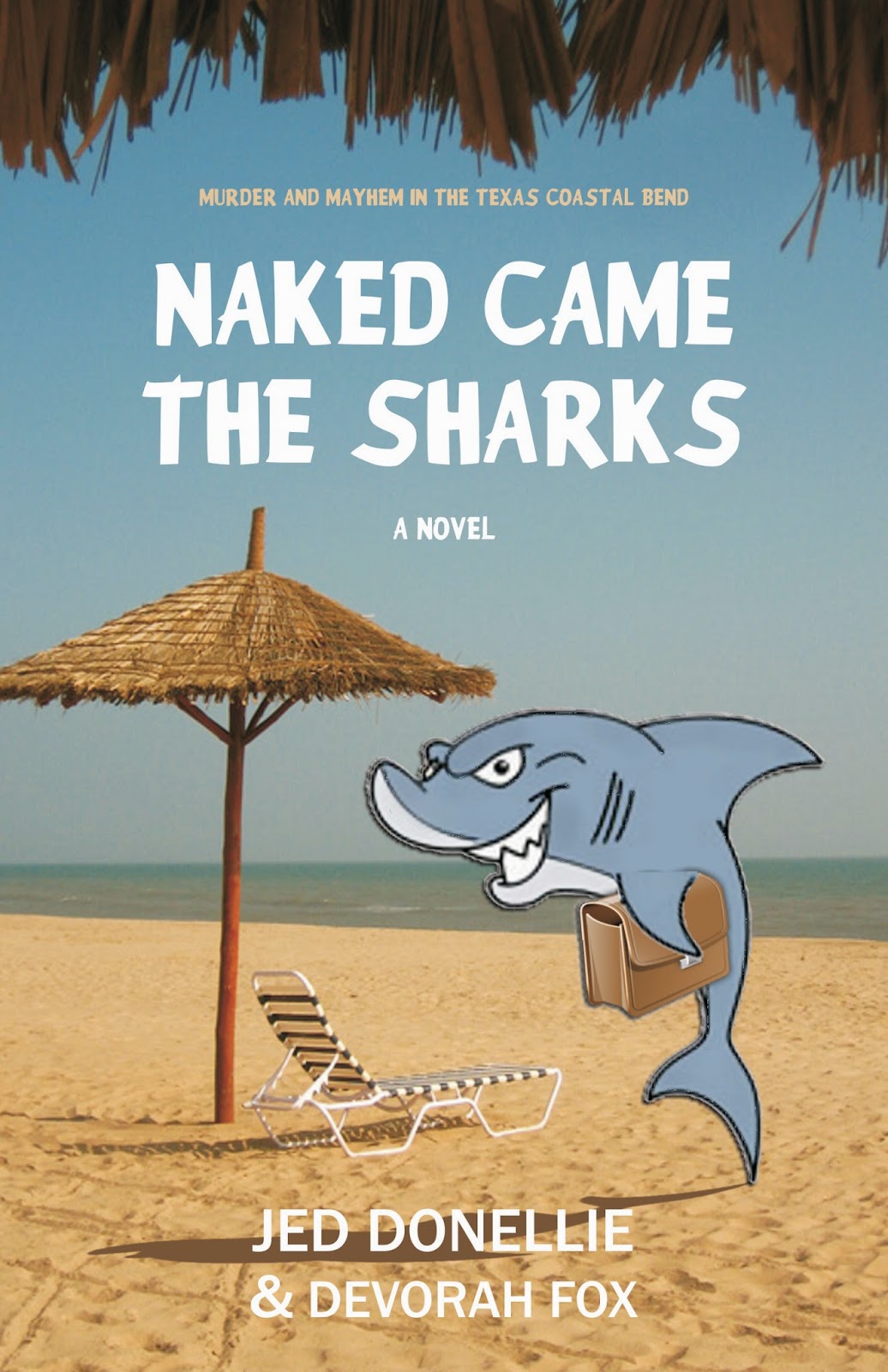 The first weekend of July 2014 marked the official launch of The King’s Redress, Book Three of The Bewildering Adventures of King Bewilliam, a literary fantasy series. I’m thrilled to have finished it and seen it released but I already miss spending time with King Bewilliam and his knights, so I may have to write another one. 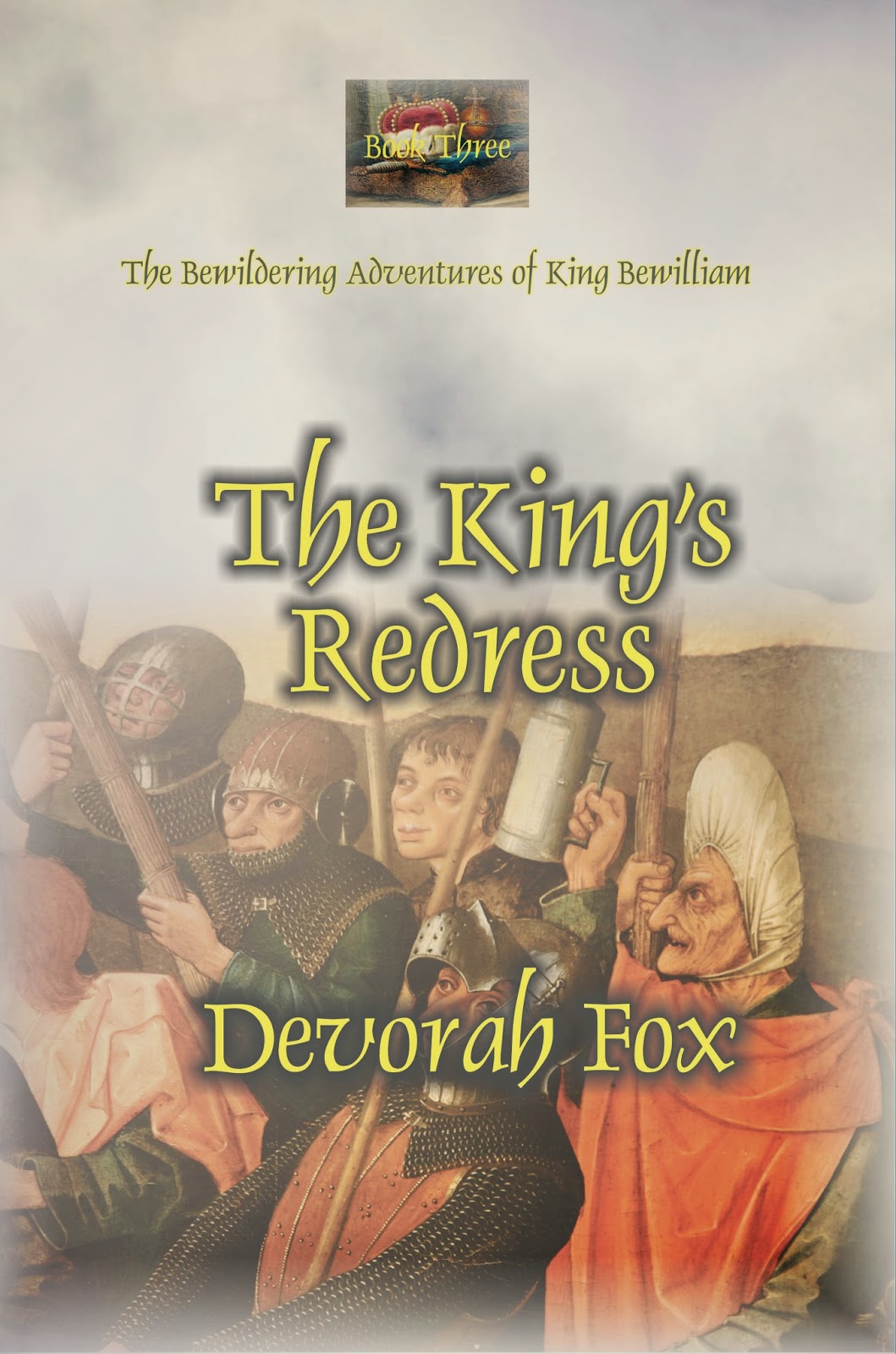 Can you share an extract with us?
Here’s part of a scene that I really like from the middle of The King’s Redress, with Robin, King Bewilliam, and his youngest knight, Maxwell.


“Your father said you were polishing your tracking skills. May we ask what your quarry is?”Sir Maxwell beamed. “Some time ago I said that there was something that I wanted to show to Your Majesty. If fortune smiles on us, I will be able to show that to you now. I’m trying to spot him. Do you see him, Sire?”“See who?” Robin squinted, trying to bring the details of the glade up ahead into focus. Light filtered down through the lacy canopy of bare trees and shadows dappled the ground below. The shapes of dark and light shifted as the wind moved the tree limbs. “Not ‘who,’ Sire, ‘what’.” Maxwell craned his neck forward and then looked up. “The gryphon. Can you spot him? He can hide, I’ll give him that.”Gryphon? Robin recalled their conversation the night of the vespers tourney when Sir Maxwell had explained the changes he made to his blazon. Apparently Maxwell was not only convinced a gryphon existed, but that one inhabited Bell Castle’s grounds, had mated with Meeyoo, and sired her kitten, Meeyowyow. Surely there would be no mistaking a gryphon if one prowled the woods ahead. Something with the body of a lion? They didn’t have lions in the Chalklands, but Robin had certainly seen enough representations of them to imagine what one should look like. And with the head of an eagle, and wings? They would have to be enormous wings to lift such a big animal.“He should be somewhere around here, Sire,” Maxwell said. “He wouldn’t stray far from this spot where he can keep Bell Castle in sight. It’s because of Meeyoo. Gryphons mate for life you know. He wants to be close to Meeyoo. When she was ill and it looked like she would die, he acted as if he was in mourning. He didn’t hunt, he didn’t eat. He slept a lot and when he was awake, he just lay here, gazing at the castle, sighing.”Maxwell had truly seen the beast and on more than one occasion? Had gotten close enough to a gryphon to hear it sigh? What would the sigh of a gryphon sound like? It would be loud, Robin imagined. Doleful. “When Your Majesty took her to the healer in Dulcimer, it was as if he knew she was no longer at Bell Castle. He left his post here in the glade. I did not see him again until after Your Majesty returned.”Because the gryphon trailed us to Dulcimer and back? There was no question that a large airborne creature kept them ever in sight. Had it been the gryphon? Robin recalled their overnight encampment and the unearthly roar that had not only startled him and his soldiers, but had also scared off a pack of hungry wolves. Had that been the gryphon, protecting Meeyoo?


What's the soundtrack to your work?
I am still pretty much listening to the same Pandora jazz fusion station that you asked about the first time I visited, but I have added a new artist that heads up the list: Billy McLaughlin. If The King's Redress had a soundtrack, it would be his "Candleman."


McLaughlin's personal story is quite moving. He had an acute condition that made it unable for him to play and he had to teach himself to play all over again using his other hand. It makes me wonder what I would do if I lost any of the abilities that make it possible for me to write..


As for Naked Came the Sharks, I was thrilled to have permission to use Kelly Brown's "Song of the Ocean" as a soundtrack for the trailer.

You had an innovative way of marketing your book, Devorah. Can you share that with us?
Oh, you must mean the ArtAbout.

Every fall, the Port Aransas Art Center organizes an art walk. Art lovers go on a self-guided tour of galleries and studios, each one offering special exhibits and refreshments for the event.

My books are all available at the Art Center and I wanted to participate in some way. Instead of hoping that the tour would lead people to my books, I decided to take my books to the people. Some faithful (and possibly half-crazy) fans and I got dressed in medieval costumes and took the tour.

The itinerary is a bit spread out and we needed a conveyance. So there we were riding around in golf carts, knights in chain mail and helmets and ladies in gowns and tiaras when shorts and Hawaiian shirts are the more typical attire.

We were a sight. We finished at a local café where we posed for photos beside a sand sculpture of one of the castles in the book, and we had an accolade for one of the knights.

Did you enjoy it? Would you do it again for the next book?
We had a blast but I’m not sure I want to make it an annual event. I am considering participating in the Ingleside Renaissance Festival.

I know, that’s a somewhat later period but what’s a few hundred years between friends?

You're not kidding! It's about 350 years out, Devorah, and takes place in  another country completely ha ha ha

Ha ha. As I say, what's a few hundred years! And for some time I’ve been dreaming of hosting a madrigal dinner, perhaps in cooperation with the local community theater.


Have you always been interested in medieval matters? Have you travelled to the UK or France? If not, do you plan to?
Honestly, I’ve never been much of history buff and history was far from my best subject in school. However, “once upon a time” was how the King Bewilliam series wanted to be told so now I find myself doing extensive research into the Middle Ages.


"I was fortunate to be able to visit the UK two years ago. I loved my tour of Windsor Castle, St. Albans and Verulamium".


I was so grateful to get to see Stonehenge, even though it was cold and rainy that day, and I had a beer in what was touted as the oldest pub in continuous operation.

Them there Southerners are always trying to skank our heritage, Devorah. Here's the oldest pub in England...Nottingham's Trip To Jerusalem (1189)

hahahahahah. There are at least fifteen pubs dotted about the place all making the same claim! So, what was the last a) book you read  b) CD you listened to and C) film you watched
I recently finished Along the Watchtower by David Litwack. 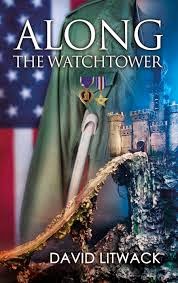 I really enjoyed it and not just because it had princes and castles and touched on themes similar to those in my King Bewilliam series.

As for films, I’m not much of a movie-goer. Every now and then I’ll catch one on TV. Lately I have been riveted to the small screen by the Australian Broadcasting Corporation TV series Miss Fisher’s Murder Mysteries and now I plan to watch all over again the ITV series Foyle’s War.


Both are period dramas so maybe I’m becoming a history buff after all. I've also been listening, as I said, Pandora jazz!

And what does 2015 have in store for fans of Devorah Fox?
I plan to launch the book I’m working on now, Deadline, in January. That’s a contemporary thriller that revolves around a specific 1993 event so it’s something of a period piece.

That’s only twenty-one years ago but it’s still requiring quite a bit of research. Plus, it has a subplot that harkens back to the 1930s and 1940s, even further in the past.

Then l plan to start a new novel during National Novel Writing Month this November for release in the summer of 2015.

Devorah, it's been an absolute pleasure to see you again, and - forsooth! - I wish you all the best with your present books and the books to come!
Thank you so much, Wiz. I really appreciate it and the best of luck to you too...

and of course, also on 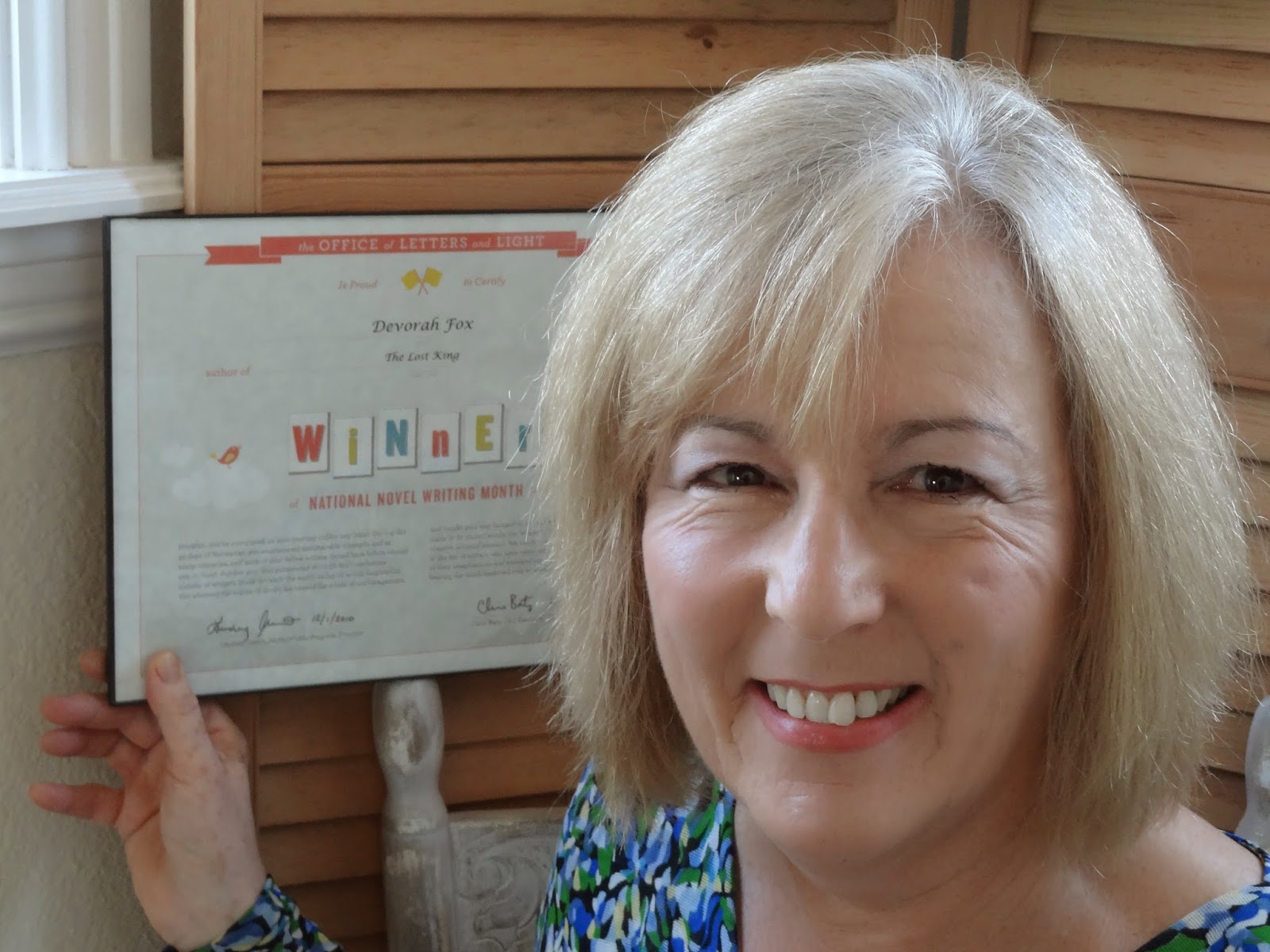 It all begins to go wrong in Medievalworld : Classic "Black Knight" scene from
"Westworld" (1973)