Resurrecting Vlad Dracula...Shane O'Neill is around the Cauldron! 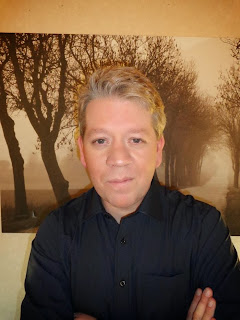 Shane KP O’Neill is the writer of The Dracula Chronicles, a new and exciting series adding a new dimension to the Dracula myth. He has begun the series with a later Chronicle to give his readers the vampire first. The series then continues on with Chronicle #1, For Whom The Bell Tolls, to take you back to the beginning.
The author developed a fascination with Dracula from an early age. Like many others he was enthralled by Christopher Lee's portrayal of him on the big screen. It was in his late teens that he discovered Dracula the man and the love affair began from there. An avid lover of history, he studied the period in which the real historical Vlad Dracula lived, 15th Century Balkan, for many years. It followed from there then that with his love of writing he would always choose Dracula as his subject.  He built a concept and premise where he could accommodate both Dracula the vampire and Dracula the man. Away from writing, the author has a wide range of interests. He reads a lot of books from a wide variety of authors though his main interest lies in the horror genre.  His love of books is matched only by his love of the countryside and of course, his family.  As an added note, he has lived and travelled all over the world. He has a love for all things historical, with a particular fascination for medieval Europe. Anywhere he travels, he likes to search out locations with an historical interest and will always hunt for the ruins of an old castle before heading to the beach.


Hiya Shane. Good to have you back.
Great to be back, Wiz!

Original interview around the Cauldron with Emma "Sanguinary" Edwards

So, tell Wizardwatchers:Who is Shane O’Neill?
He is a man that is often misunderstood, but who has a warm heart and always the best intentions. He is also flawed and has failed to hold onto those most dear to him throughout his life. But he is a writer, with great ambition and drive, of a series of books that will blow people’s minds.

You live in Norway. How did that happen?  Is Norway as beautiful as they say it is?
I followed my heart and came here for love. Because it is such an expensive place to live, I think it is only for love or a job in the oil industry that any westerner would move here. It is exceptionally beautiful, even more so than my native Ireland.

You are the popular writer of The Dracula Chronicles. Tell us all about that. What is the latest release?
The Dracula Chronicles is a series that combines my love of Dracula the vampire with my love of Dracula the man. It is a vast concept built around the premise of Lucifer trying to ascend again to Heaven through the destruction of the institution of the Catholic Church, which he hopes will win him the battle of souls in his scheme to destroy mankind.


I have built my story around the real historical Vlad Dracula. Unfortunately, many people have preconceptions the moment they hear the name Dracula. I’m trying to distance myself from that and from Bram Stoker’s classic, which bears no resemblance to my books. We share the same character name simply because I have based my concept on the real man.

The latest release was on November 11th. This is Chronicle #1, For Whom The Bell Tolls. 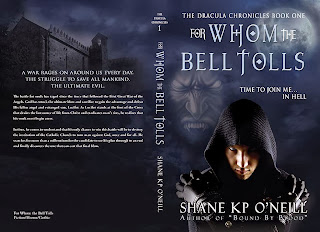 Is this endeavour a life’s work type of thing? Like Cerebus by Dave Sim? If not, what is your plan for the series?

Yes, absolutely. I wrote the first parts of this series all the way back in 1984. I began to write the first book proper in 1992. Since 2004 it has been close to a full-time project. This is why I have elected to go it alone and do it my way, so that I can maintain full control over it.

I read your prequel “Lamb of God” and strongly recommend it. Where can readers find this prequel?
I am exclusive to Amazon UK and Amazon US. You can find all I have written there. 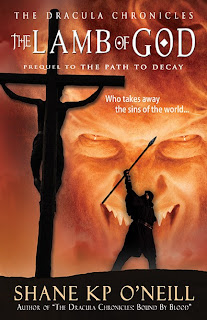 How historically accurate is the detail in this prequel. Are you a fan of history?
I obviously put my own spin on things and use myth and folklore as well as true historical fact. But even those sources most probably have come from eye witnesses to the events back in the day, so there may well be a lot of truth in them too. I do strive though for authenticity in my writing and try to remain as true to history as I can. The real subtlety of my writing is how I blend my story with real historical events and, in some cases, how I have filled holes in many historical texts that have not explained how some events took their course.

My influences in this prequel and, indeed, in the whole series are more from the Kabbalah than the Bible as most seem to think.

You covers are excellent. What is your message to Indie authors about covers?
Your cover is the first thing a potential reader will see. That makes it your strongest selling tool. If people like your cover, they will read your book blurb. My first two book covers followed the 90’s trend and are too detailed. Many people think this has hurt my cause, and I will be changing the covers for those in due course when I produce newer editions of those works.

My last three covers have all been produced by Blue Harvest Creative, in whom I have a lot of trust, and with whom I have a great relationship. The best is still to come on that front.

We‘re both huge fans of Hammer Films. My mum used to let me watch Hammer Films when I was ten, and friends came over to stay the night because they had heard about such lax/inspired parenting? Have you a decent Hammer Film story?
My mother never let me watch them at all, but I babysat my sisters every Friday and Saturday night from the age of twelve and there was at least one Hammer horror every weekend, as well as a host of other horror movies. Needless to say I was addicted, but most especially to Christopher Lee’s Dracula.


"As much as I loved these movies, I found Peter Cushing a major irritation. If people think John Wayne was the same in every movie, they should pay close attention to Peter Cushing. Promise me now to post no pictures of either of those two…."


I have no real story I can offer from those days, but I can guarantee you my incarnation as a horror writer began right there.

I absolutely love Peter Cushing. Particularly in a film called The Uncanny. And as Van Helsing, of course. Anyway, give me your top two Hammer films and add another (second division) horror film for the treble?

I loved all the Dracula and vampire movies produced by Hammer, and to pick any two of those would be extremely hard. Therefore, I’ll say the two Quatermass movies they made in the late 1950’s. I found those riveting when I was a kid.

None of the horror movies I love could ever be second division, but if I had to choose another it would be either be the original version of The Omen, or The Abominable Dr Phibes. Vincent Price was simply awesome.


Agreed. I'm a massive Vincent Price fan. Theatre of Blood is in top ten films ever. Great choices for the back up. If you became a super selling author, would you live in a country mansion like that of Mocarta in “The Devil Rides Out” or a sleek city-based penthouse suite like that in “Dracula AD72”
I’ve never really been one for extravagance, except for when I’ve dated extremely beautiful women or been married to one. Age brings wisdom though and it is more prudent to be smart with your money. Still, if I was that successful, I would certainly have a lovely home, or two. I would opt for the country mansion definitely as I really am a country boy.  Do you know, The Devil Rides Out was the very first horror novel that I read?


Great novel and great film, Shane. Chris Lee has been trying to get that remade for the last decade.

Are you a fan of Ash in our mutual friend Emma Edwards’ brilliant “Sanguinary” series? Would you slay him with your garlic-tipped stake if you saw him preening and poncing with the blondes in an Oslo lagerhaus, or would you jump gallantly to his protection as I was poised to eviscerate him?
Don’t tell Emma as she is very dear to me, but I wasn’t a fan of Ash at all. I felt sorry for Angel, even though she was her own worst enemy at times. As for Ash, I found him to be extremely immature and volatile. Therefore, I’d be at your side in case you failed.

What was the last book you read and the last CD you listened to?
The last book I read was The Blood Gospel by James Rollins and Rebecca Cantrell. A great book, and a very interesting take on vampires. There were themes similar to those I write and therefore I found it quite fascinating. The last CD I listened to was

Definitely humdrum. I was bitterly disappointed with his appointment and continue to be. Everything was in place for Mourinho to take over and I was sure he would take the helm. It needed someone like him to continue the legacy of Sir Alex. In 6 games, Moyes took a team that had won the league at a canter last season and even with the additions of Fellaini and Januzaj, United were 11th and struggling. That is unacceptable and the reality is upon us that United’s era could be coming to an end.

What did you eat last night for your evening meal?
Last night I ate sautéed potatoes in a cream sauce, with broccoli, carrots, fried onions and a fried brisket of pork.

And finally, what do fans of Shane O’Neill have to look forward to in 2014?
By 2014, they should have Chronicle #2 in their hands, The Path To Decay. Chronicle #3 will also surface later in the year, The Gates Of Babylon.  There will also be new editions of the two Bound By Blood books with new covers that will turn a few heads. I also promise to release more of my horror shorts in the series, Tales Of The Black Sabbath. Shane, it's been a pleasure to see you again. You are my type of writer and I wish you all the best with your magnificent series.
Thanks Wiz for having me back. This has always been my favourite blog and to make a second appearance here, I’m truly flattered. 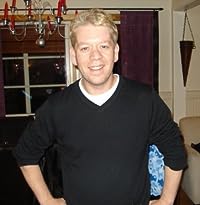