Norse Mythology and Romance: An Interview with ST "Elsker" Bende

Before finding domestic bliss in suburbia, ST Bende lived in Manhattan Beach (became overly fond of Peet’s Coffee) and Europe… where she became overly fond of the musical Cats. Her love of Scandinavian culture and a very patient Norwegian teacher inspired the ELSKER series. She hopes her characters make you smile and that one day pastries will be considered a health food. I contacted ST on the Wizphone and here's what she had to tell us.

Tell Wizardwatchers a bit about yourself, S.T.


I’m a baking aficionado, and I love all things Scandinavian (except for fish). I watch True Blood and Big Bang Theory religiously, and I write books about Norse mythology… with a romantic twist.

What's it like for a Scandanavian living in America? Is it a good blend?
My heritage is Scandinavian, but I was born in America. I fell in love with Sweden when I was living in Europe, and when I got home I decided to sign up for a Swedish class. Finding none, I signed up for Norwegian instead. The real Olaug taught the course, and though my language skills remain sub-par, Olaug is now my honorary granny. She’s taught me about Syttende Mai, my Norwegian roots, and most importantly, she taught me to make those amazing Norsk waffles. Takk for maten, Olaug.

Tell us about your latest project?

I’m working with my editor, Eden Plantz, to polish Endre -- the second book in The Elsker Saga.


The Elsker books follow 20-year-old Kristia Tostenson as she moves from her one-stoplight town to Cardiff University in Wales.

Once there she falls for the hottest guy on campus… who happens to be an Asgardian Assassin, and the Norse God of Winter.

It’s a fantastically fun world to get lost in, and I’m so happy I get to spend a little more time there this summer!

Excellent! I really like your colourful covers. Who designs them?
Thank you so much. All of Entranced Publishing’s covers are designed by their art director, Suzannah Safi, and their executive editor, Ashley Christman.

I hear that Elsker is based on Norse Mythology.  And are you a fan of Marvel's Thor? If so, what did you think of the film?

I’m a HUGE Thor fan! I’ve never read the comics *hangs head in shame* but I loved the movie.

First of all, I think the sun rises and sets on Kenneth Branagh.

I’m a ginormous Shakespeare fan, and the way he’s made those plays accessible through his films is just… sigh.  It’s fantastic. Shakespeare wrote to the groundlings, not the aristocracy, and I appreciate that Sir Branagh just keeps it real in his interpretation of the plays.

He did the same with Thor -- he kept the mythology grounded, while bringing his signature epic style to the filmmaking. I loved that.  Second, Anthony Hopkins can do no wrong in my eyes.


The man is an absolute genius. To see him play Odin was awe inspiring. And third… well, Chris Hemsworth made a mighty fine Thor, dontchathink?

He was alright, ST.
No more than alright? I will be first in line to see Thor 2 in November.

I did yes. Thought he had a lot of charisma. Anyway, more to the point,why don't you like eating fish? That seems unusual for a Norwegian?
I know, right? I really should embrace my inner Viking. It’s terrible. Maybe I just haven’t tried the right kind yet.

I'm the same. Can't be doing with anything that stares at you when you are eating it.
hahahahahahah...yes, I know what you mean. Maybe that is my problem...

The Norse God of Mischief, Loki, is displeased at something you wrote in Elsker and summons several of his Imps. They cross the veil and kidnap you as you are heading to buy ingredients for a New York Toffee Cheesecake. You are taken across the Rainbow Bridge, clapped in irons and thrown into a rocky Kjeller to await Loki's mercy. Volstagg, one of the imps, is a kindly soul and when Loki isn't looking, throws a sack through the portcullis. Inside are three books, two CDs and a DVD. What would you like them to be?

This is a fantastic scenario! So sad about my New York Toffee Cheesecake, though. Um… okay. I’d take Imagine Dragons and Muse, because their music is just so fantastic.

I love writing to both of them. (I’m assuming Volstagg took pity and tossed in a laptop for me too, right? If not, I’m naming a really, really bad character after him in my next book.)


For my books, I’d choose:
(1)  The Complete Works of William Shakespeare. Because there’s quite literally something in there for every mood.

Complete works of Shakespeare on KOBO for £2.26. There is something odd and a little sad about that, imo (ED) And I should probably choose Thor for my DVD to inspire me to kick Loki’s bootie for kidnapping me and all, but in all likelihood I’d choose Anchorman or Talladega Nights. Will Ferrell just cracks me up. And I’d need a good laugh in the rocky kjeller.

Would you ever move to Norway?
I’d love to live in Norway someday - what a fun adventure! Maybe one day I can have a cabin there like the real Olaug, and visit whenever I want. *sighs* That would be fantastic.

You met Alexander Skarsgard and he signed your book! Did you get cheeky and ask him to play a character in the future film version of Elsker?

I wish! I believe I asked him to “hubba hubba gobbledy gook sign please”. Then I squealed like a howler monkey and drooled. I wish I’d been cheeky! Or even coherent. I mean, it was Alexander Skarsgard. He inspired Elsker’s Norse god, Ull. And he’s ALEXANDER SKARSGARD!!! It was *swoons at the memory* just so amazing…


That's a terrific story: so,what do fans of ST Bende have to look forward to in the future?

Endre, the second book in The Elsker Saga, is
coming out in September. 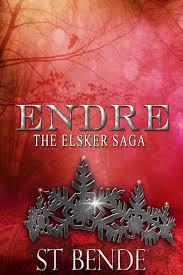 And Tro, the third book, is in the works. I’m so grateful for the opportunity to write more of Kristia and Ull’s story.

I owe heaps of gratitude to the awesome readers who have embraced my imaginary friends and I.  We appreciate it so very much and we hope we do you proud with the next installment!

Now help me out -- what fun mythological twists should I throw at Kristia and Ull in the third Elsker book? Tell me in the comments!

ST, it's been a pleasure to meet you and Wizard watchers wish you all the very best with your books...

Thanks you so very much. It's been a pleasure to meet a real life Wizard..
You can follow ST Bende on Twitter @stbende, or send an e-mail to stbende@gmail.com.