My kids have done very well this term at school, and as a treat for the two younger ones I took them, and a friend, to one of those indoor soft-play-ball-poolie-leaping about zones. (Carlos Chalks...hehehehehehehe....Ed)

You know the kind of thing I am talking about. Well, I know why I don’t frequent these ‘mad houses’ now!

I sat for two hours in this tin roofed barn of a place, freezing, and wishing that I was  having dinner with the devil instead. The place was full of screaming, yelling, crying weans; the noise was deafening! And the real bummer about it was these screaming kids weren’t mine and I couldn’t tell the wee buggers to ‘SHUT-UP!’

However, the point of this excursion was for my kids and they had the ‘bestest’ (to quote my ten year old son) fun they had had for a while, and that makes me the happiest mum in the world.*

Today’s guest - woah, I nearly wrote gusset, wow that would have been a blunder of all blunders -  is top California author, Vickie McKeehan.


Vickie and I have known one another for over a year. We met one afternoon whilst strolling in the Solstice Canyon in Santa Monica on the Pacific Coast Highway, we had a blast.

Map and location of Solstice Canyon


What the average Briton knows about
Santa Monica - one of the finest US shows ever; "Baywatch"

I knew, Vickie, enjoyed all things ‘Just Evil’ therefore I invited her to the Wizard’s Cauldron for  a spot of potion mixing and wizard worshipping!

Hi Vickie and welcome to the show...

Pleasure to be with you and thanks for inviting me.

So enlighten us Wizardwatchers. Who is Vickie McKeehan?

I’m one of those crazy people who write, who spend  too much time talking to the voices inside my head way too often. I really need to stop letting them take over my life the way they do.  We met over in Santa Monica the last time...

Yes we did...and what a beautiful place...

....so, Vickie, if my editor has had enough playing, when did you first realise you wanted to be a writer?

I’ve always known I had a knack for storytelling. My made-up stuff often got me in trouble. My mom called it stretching the truth ....aka lying, haha. I called it being creative.

I try to write at least 8 hours a day. (8? Wow…I don’t know whether I am impressed – or incredulous!...Ed) It doesn’t always work out that way. If I’m out and about and happen to get an astonishing idea in my head that I can’t squash, I get out my recorder and get it down then and there. If not, I try to keep it on the forefront until I can get back to my laptop.

You use a recorder, Vicky?

I plan to use one of those soon, if I can work out how to use one! (hahahahah..Typical you...Ed)  You also write screenplays, tell us about that...

For screenplays I collaborate with my writing partner, my husband. It’s just like writing a book, only in this format you make it happen with less pages. You still have action, you still set the scenes, and you still move the story along with dialogue and strong characters.

Are the names of your characters in your novels important?

My character names, both good and bad, usually have meaning to me. For example, if I’m naming a bad guy, I usually think of an old boyfriend or someone I didn’t like, use some version of that name to make him/her ghastly and disgusting and then kill them off or have them do something astonishingly stupid to get locked up forever and ever.

Not really. The Evil Trilogy’s first book, Just Evil, was 600 pages in its draft stage. At the time, I had an agent who told me she loved the story, but that it was way too long to market. She suggested I pare the book down, make it three books, each female lead getting her own story. The Evil Trilogy characters would not shut up from start to finish for three years straight. I thought for a while there my hubby would get fed up and walk out. I started the first book in the Pelican Pointe series in between Just Evil and Deeper Evil. Again, the characters Scott, Nick, and Jordan would not leave me alone. As for finishing the Pelican Pointe series as long as readers want to read about the town, I’ll keep writing. I’ve already outlined the next four books in the series and know who will hook up with whom. 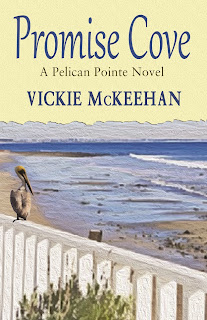 I wrote the first Skye Cree book in between Dancing Tides and outlining Lighthouse Reef. Sorry for the long answer to your question. But my characters don’t understand that there’s a specific genre, a box if you will, that I’m required to put them in keep them there.


"It makes no sense to me to limit a story to a specific genre. If the characters and stories are strong, I don’t see why a writer shouldn’t expand their writing chops to create whatever world they choose. " (McKeehan, 2013)

Agreed. Now, which of your book series would you like to see as a film adaption and who would you choose to play the main characters?

I’ve often been told by readers they’d like to see The Evil Trilogy made into a mini-series. I’m not even sure they do those anymore. But I’d certainly love to see it happen because I think the entire story is compelling. Having said that, I think Promise Cove would make an excellent movie for the Hallmark Channel. And I really don’t care which actors they choose to play the roles as long as they pick Johnny Depp to play something and invite me to the set to watch it happen.

With regards to The Bones of Others, in the Sky Cree series, do the characters seem real and believable? Can you relate to their predicaments? To what extent do they remind you of yourself or someone you know? 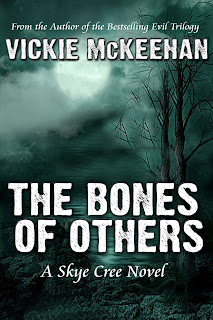 Hmm, did Gandalf seem real and believable in Lord of the Rings?


Seriously though, I would hope everyone knows that Skye Cree is a product of my imagination. I mean, I wouldn’t have wanted to go through what she did in her young life. Life can be cruel and hard, and at times difficult. Skye is a survivor. I think readers will relate to that and be proud of Skye’s resilience, her hope, and her courage.

What is your current work project, and plans for the future?

I’m in the process of getting Lighthouse Reef ready for release in April. I’m also about half finished with The Bones Will Tell, the second Skye Cree novel. After that, I’ll start the fifth book in the Pelican Pointe series, Starlight Dunes.

Vickie, you have organised a girlie weekend with Kit, Baylee and Quinn at a beachside health spa. After a vigorous Jane Fonda style workout you treat yourself to an Andalucian Mud Wrap and the Beach Bunny Pedicure. Unfortunately, you find all this girlie-stuff tedious and decide to switch-off by reading some books and listening to music. What 4 books and 2 CDs did you bring with you?

Second, it would have to be a mixed CD I’ve put together myself with plenty of Sheryl Crow, Sarah McLachlan, Springsteen, Clapton, Red Hot Chili Peppers, Foo Fighters, Dwight Yoakum. My music tastes are quite varied.

Anything written by John Grisham

Anything written by Nora Roberts

Vickie, what do you do to relax and get away from your writing routine?


Did I mention I love to read?

Yes you did hahah. And, finally where can fans of Vickie McKeehan find out more about you and the books...

My readers (and hopefully - haha - new readers), can contact me at:


Cracking interview regarding The Bones of Others
Vickie, once again it's been a pleasure to talk to you and I wish you the best of luck with your next few books

Been a pleasure meeting with again, Ngaire. And thank you...

*Disclaimer: Ngaire only ever tells her children to ‘be quiet, please!’ and she loves all things that scream and yell! :-)