An Australian Romance: Danielle Belwater - around the Cauldron!

This week, author Danielle Belwater joins us all the way from Australia.

A paranormal romance and YA author, Danielle has just released her first novel; the beautifully titled and covered, "Of Fire and Roses." Take it from me, she is a delightful person who is a pleasure to interview.

She's just undertaken an endless blog tour and those of you interested in finding out more about blog tours, will be interested in meeting Danielle who has done a passable impression of One Direction's infinite World Tour this past two months. I interrupted Danielle on the Wizphone as she lassoed a bull on her ranch somewhere between the cobalt South Australian Pacific and the golden sands of the outback.

Hiya Danielle. Tell us a little about yourself?
Thanks so much for calling. A little bit about me, why is that always such a difficult question to answer?

I’m a country girl, love my horses and dogs, four wheel drives and tractors. My 2 young daughters (2 years old and 10 weeks) keep me insanely busy and those precious yet all too rare moments when they are asleep at the same time are golden.


When I’m not cleaning up poop or doing the never-ending procession of dishes, I can be found nose down bum up in my laptop either researching or crafting my next masterpiece, or watching cats do dumb stuff on youtube.

Whereabouts in Australia are you from?
I grew up in the ‘burbs of Adelaide, but when I married my farmer husband, I moved to a rural town called Monarto South.

Although I’d hardly call it a town – more like a hall and some paddocks. Lots and lots of paddocks. But I love it and wouldn’t be anywhere else. It’s mostly a farming community with a few horse properties to boot.


The closest town is Murray Bridge (or Muzza Bizza as the locals like to call it – bit of Aussie slang for you) and they even have McDonalds. Not that I’d ever eat it. I’m a KFC girl myself.

You have a debut novel on sale. Tell us about that?
I think I’m still in shock from this whole trip. I still find myself staring at the cover in disbelief and telling people ‘I wrote a book’. Usually following by cackling laughter.

Of Fire & Roses is not just a boy meets girl / boy gets girl story, it’s about love conquering obstacles and learning from mistakes.


While it is about ghosts and magic, it is also about how my characters deal with their own demons and how those personal demons can impact on their relationships and addresses the question of what would you do for someone you loved.

It’s a beautiful title. I love it. Where did that come from?
Writing the title was the hardest part! I didn’t come up with the title until well after the first draft was written. The themes of fire and roses didn’t stand out until I re-read the manuscript and I noticed the characters had given me the title themselves. Originally it was going to be Cora’s Curse (or variations thereof) but it wasn’t right, not very original and pretty dull if you ask me.

Fire signifies Nate’s struggles and anger, while roses are Cora’s MO. Beauty, simplicity, but with a dangerous side

In what genre do you write?
I write paranormal romance mostly. I do love a good ghost story. There is something about the paranormal that is scary yet fascinating at the same time.

I’m one of those people that watch scary movies through a pillow but can’t seem to look away. I do have a fantasy series going around in my head at the moment, though. I just like making stuff up, it’s way more fun than real life. 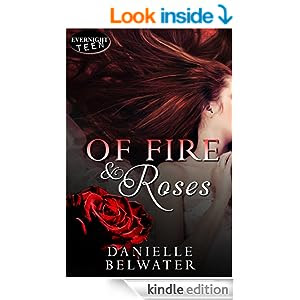 What would you like to achieve with your book?
Being published was my number one goal. I hadn’t really thought about after!


"Having wanted to write a novel since I could hold a pencil, I’m just sitting back and looking at it in awe.Long term I would like to give up my day job and become a professional author (but who doesn’t!)"


You’ve just been on a massive blog tour. To my knowledge, you are the only interviewee around the Cauldron who has gone down this route. Tell us about your experiences. Has it helped in getting the Danielle Belwater word out?

This was a tour organised by my fabulous publisher, Evernight Teen.

I’m not sure if it necessarily translates into sales (you only have to look at my amazon ranking to know that!) but it has certainly got the name out there. I’ve had quite a few new fans and followers on social media.

It is quite a lot of work, you need to write guest blogs and interviews and I know some authors don’t think it helps, and find blogging a long and labour intensive job, but for the Facebook likes and Twitter/Pinterest followers alone, it definitely increases traffic which can only increase interest.

Plus, guest blogging puts me in contact with wonderful people such as yourself.

Thank you, Danielle! So, is the pursuit of true love a worthwhile pursuit?
Is that a trick question? Of course it is! (Although I’m sure there are those out there who would disagree.) The feeling of being totally swept away by another person, to have someone who accepts you for who you are, bumps and all. Someone to laugh with and cry with. I love the motto a joy shared is a joy doubled, but troubles shared are troubles halved.

Tell us about your horses?
Ma boyz! I have two riding horses, my thoroughbred Morty is a gem, very willing and great fun to ride. Although catching him can be somewhat of an issue. My second is a little Welsh pony, Ben. 3 years old, he’s a typical teenager and thinks he’s bigger than everyone else. 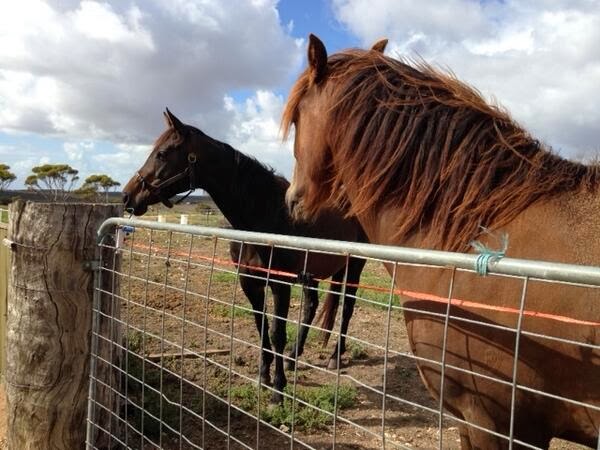 I also have a thoroughred mare who is about to have an Australian Stock Horse baby. I’d love to do more Western style riding and some campdrafting. (An Australian sport where the rider has to expertly work cattle – I don’t know know how expertly I would be able to do it though.)

We also breed the occasional thoroughbred for racing which is lots of fun, but a heck of a lot of work for not much financial gain, if any.

Bookies, annoyed that one of your horses is well fancied for the Caulfield Cup, kidnap you and the colt and lock you away in an outback stable surrounded by crocodiles and specially bred sentry kangaroos.  Underneath a pile of mangy straw, you find a sack. In the sack you find two books, two CDs and a DVD. What would you like them to be?

Those blasted sentry kangaroos. If time was on my side, I’d train the colt to jump. We’d jump over the crocs, but the kangaroos sound like they might be a problem. If the Nation’s wildlife is shooting at you, is it okay to shoot back? But if I couldn’t devise an expert plan to lose the crocodiles and outwit those kangaroos, my choices would be:


and my Henry Cavill Superman calendar (does that count?). Something fun to read while I look at something nice.


Adele’s 21. That’s a lady with one incredible voice, and again, lots of novel worthy heartache. (Plus my cousin plays bass guitar for her – not that I’m namedropping or anything).

and Ever After for the DVD

Are you proud of the achievements of your compatriot, Kylie Minogue around the world?
She’s done pretty well for herself, hasn’t she! Shame she can’t seem to find a nice fella. I know a few farmers that would do right by her.


What did you and the gang have for tea last night?
You sure you wanna know? We all had gastro. But the night before we had tacos.

Two hungry chaps about to enjoy a Taco

What next for Danielle Belwater in 2014?
Lots of things! I’m madly penning book 2 in the Erlanis Chronicles. Just when they thought it was safe to go back into the forest! We also get to see things from Cora’s perspective which is refreshing.

I’m almost finished the first draft of a novel based in Japanese mythology, where I get to put another hero through the ringer. Finally, I’m due to go back to work after a year of maternity leave in December which I would like to avoid if at all possible!

Danielle, it's been an absolute pleasure to have you on the show, and I wish you, your family and your wonderful horses the best of luck in 2014.
Thanks, Wiz. And the same to you!

The best ever pop song to come out of Australia?
Kylie's "Can't get you out of my head".