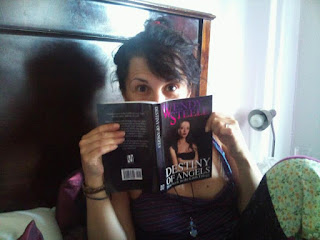 A fortnight ago, I met a writer called Wendy Steele. She's written a terrific book called Destiny of Angels which I am definitely going to buy this year at some point. We're hopefully going to be working together shortly on a writer's group. She deserves loads of success and is one of the most helpful people I've met on my journey so far. And nicest. Go over and visit her on her pages. She's terrific and great fun

I asked her far too many rude and impertinent questions the other day and here's what she said.

Writing background? When I left school, I had no idea what I wanted to do but it's hard to envisage a time when I didn't write.
My first piece was a poem aged 10, after visiting the Tutankhamen exhibition in London and, ever since, I've come home from new adventures and committed my thoughts and experiences to paper. My first piece of published (and paid!) writing was an article for the Dancing Times, after attending my first day of belly dance workshops in London, eight years ago.
As a child, I read and wrote stories, losing myself in the lives of the characters, while in my early twenties, I wrote children's stories and short stories but it was on a two day writing course, nine years ago, that I believed I could be a writer. I liked the character I created on the course and, over the following three years, proceeded to write my first novel between school runs, children's clubs, family domesticity, cleaning other people's houses and stacking shelves in a supermarket.
After attending Swanwick Writers Summer School for the second time last year, and receiving great advice and help, I made the decision to take time away from teaching dance and complete the current novel I was working on. 'Destiny of Angels' made me a novelist.

Writing is a harmonious accompaniment to my dancing, forcing me to sit and expand my mind while allowing my body to rest.

Once I know my characters really well and know the thread of the plot, I just put them together and the characters write the story for me. I see them on a screen in my head, playing out the book and then I can hear their voices.... and I write it down. The hardest thing for me is assembling the story and plot line, ready to 'hang' the characters on. Rarely do I have more than two days writing together and I like to keep the plot line in my head. Resurrecting the feeling and wave of the plot after a four day break is hard!

3          How do you construct a novel? I notice that 'Destiny' is the first of three? Are they all plotted in advance? Do you know the outcome?

Lots of questions! (sorry Wendy!) The original 'what if?' for 'Destiny' came to me first... what if the powers from other dimensions could be channelled, used to offer choices and the chance of redemption in this level of consciousness? As I wrote and Angel's character developed, the opportunity to take her on another journey came to me. Having used six of the seven deadly sins to 'hang'  the 'Destiny' story on, it made sense to base the second book on Wrath..... and make Angel very angry. Each book has a thread and so yes, they are plotted but not strictly as the characters interact and write their own words. Editing has to be ruthless as often, they talk too much! With the third book, I know the ultimate outcome but not how the characters will get there.

4          What five books would you take with you on a year's voyage around the world? And with your first choice, why?

'Celebrate the Earth' was the first book that introduced me to 'the Wheel of the Year'. I have read and collected many others on the same subject but I always refer to 'Celebrate the Earth'. While travelling around the world, I would feel connected to the earth and the seasons of home and know that my journey would take me back there.

5          Snappy dialogue, intricate plot or detailed place descriptions? Tell your readers what they can expect from a Wendy Steele book in the future?

Yes to snappy realistic dialogue, plot not intricate but thought provoking and yes to detailed place descriptions. Setting the scene for my characters to interact is important to me. I strive to evoke the look and feel of a location as economically but graphically as possible. I read in pictures so I write in pictures too. 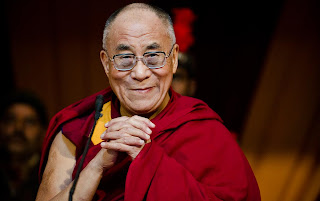 6          Which celebrity or famous person would you enjoy a night out with? And what would that night out be?

I found this really difficult. Most of the inspirational people in my life are not famous. Eddie Izzard would be funny, Stephen Fry would be interesting but I will go for the Dalai Lama, up a Welsh mountain with the sky full of stars, listening to his experiences and wisdom.

7          How long did it take you to write your début novel? Were you surprised at this? Was it hard work or did it come easy to you?

From conception to publication was about 18 months. 'Destiny' was written in 9 months. Once focussed and with the time to write, it was easy..... that was a lovely surprise. Editing was hard...getting it perfect for publication was even harder. 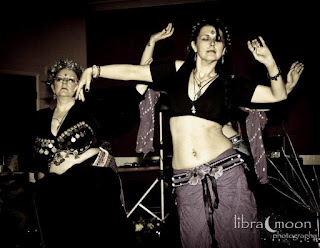 Tribal bellydance is my passion. Tribal Unity are my sisters. I came to dancing late in life....so I'm making up for the missed years now! Family time is important to me, sharing meals and news and supporting the children as they make their first steps into the world as adults. Reading, of course. I enjoy history of all kinds but especially Egyptology and Ancient Civilisations. I've always enjoyed cooking but after being poorly and having my food choices reduced, I lost interest for a while but have thrown myself back into cooking and baking and experimenting again and I love to produce food to share.
To really get away, I love camping. Up until recently, we had an old VW campervan but I'm happy in a tent, my only little luxury being a dense piece of foam to sleep on as, due to back damage, blow up air beds do not aid restful sleep. 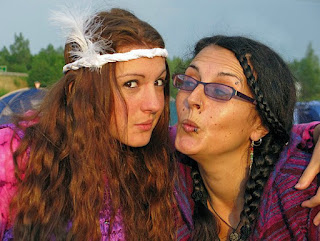 9          I write for money, fame and glory – I write because I am compelled. Which statement applies to Wendy Steele?

I write because I have to write....I always have. On returning home from a new, exciting or unusual experience, I always write about it.
Careers advice at my school was almost non-existent but I remember the one interview I had with the careers teacher. From all the cards in the 'Job box' I chose BBC researcher and was promptly told it was out of my reach and I would be better off being a secretary! I feel I've come full circle now as research for my books is a joy. 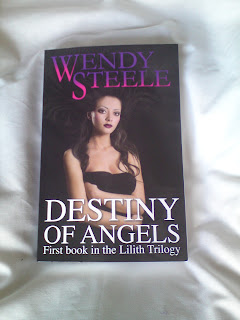 Writing projects? The paperback of 'Destiny of Angels' should be released at the end of July 2012 and that's really exciting for me. My copy arrived yesterday..... and I can't stop smiling.

I'm editing my first non-fiction book 'Wendy Woo's Year – A Pocketful of Smiles – 101 ideas for a happy year and a happy you' and the second book in the Lilith Trilogy, 'Wrath of Angels' is under way as is 'Wendy Woo's Tummy Friendly Cookbook'.

As an Indie writer and publisher, I've been finding my place in the new writing community and 'The Amazing Karmic Sharefest' monthly event is becoming really popular. On Tuesday 3rd July, a new sharing event ***THE BOB BONANZA*** will be launched where writers can promote with 'back of book' blurb and link to their book and readers can gather for a cornucopia of new exciting books to choose from. Be lovely if you could join us www.facebook.com/destinyofangelsnovel.

Do drop into my blog for a cuppa and a read at www.wendysteele.com.

Links to 'Destiny of Angels – First book in the Lilith Trilogy'
http://www.amazon.co.uk/gp/reader/B007OX5J8O/ref=sib_dp_kd#reader-link
www.amazon.com/dp/B007OX5J8O/?tag=kttus-20